That Thermoplastic Was Made From What?

It may sound fishy, but researchers say they’ve discovered a way to make thermoplastics from squid. In a recent issue of Advanced Functional Materials, a team at Penn State reveal how they were able to synthesize a protein complex from squid to create a thermoplastic that could be used in a variety of ways—from product packaging to 3-D printing. 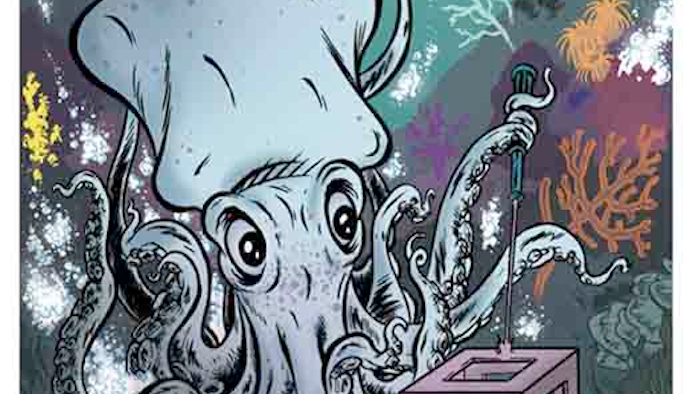 It may sound fishy, but researchers say they’ve discovered a way to make a thermoplastic material from squid.

In a recent issue of Advanced Functional Materials, a team at Penn State reveal how they were able to synthesize a protein complex from squid to create a thermoplastic that could be used in a variety of ways—from product packaging to 3-D printing.

In the study, the researchers extracted proteins found in squid ring teeth (which is a thermoplastic), inserted the protein genes into E. coli (a rapidly reproducing bacteria), which reproduced the proteins. These proteins were then removed to create a naturally derived thermoplastic.

Researchers point to a range of applications for the material. Because thermoplastics are more pliable when hot and solidify when cool, they say the tough thermoplastic they’ve created could be used in 3-D printing as source material for complicated geometric structures.

It can also be molded or used in film casting. And because it’s protein-based they say it could possibly be used for medical or cosmetic manufacturing.

Thermoplastics are polymers that are usually manufactured from petrochemicals—though some high-end plastics are made from synthetic oils. But the researchers say this discovery could be just one more step away from a reliance on fossil fuels.

"Direct extraction or recombinant expression of protein based thermoplastics opens up new avenues for materials fabrication and synthesis, which will eventually be competitive with the high-end synthetic oil based plastics," the researchers report.

The full report can be found here (subscription required): www.onlinelibrary.wiley.com.