He promised to steer the company toward new growth by focusing on ecological models and safety technology. 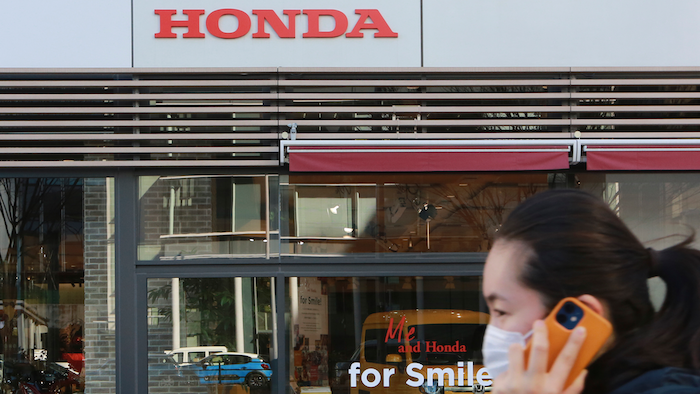 A woman wearing a face mask walks in front of a Honda Motor Co. showroom in Tokyo.
AP Photo/Koji Sasahara

TOKYO (AP) — Toshihiro Mibe, a research expert tapped to be president of Japanese automaker Honda on Friday, promised to steer the company toward new growth by focusing on ecological models and safety technology.

Honda Motor Co. said Mibe replaces Takahiro Hachigo effective April 1, and subject to shareholders' approval at a meeting in June. "I am going to build a house that is the future of Honda on the foundation of businesses that Mr. Hachigo has worked so hard to create. And this building must have resilience, to withstand this once in a hundred years transformation," Mibe told reporters.

Mibe stressed the automaker will be aggressive about developing and selling electric vehicles.

Mibe, who joined Honda in 1987, had been widely expected to take the top post, according to Japanese media. He was instrumental in further forging Honda's partnership with U.S. automaker General Motors Co. GM and Honda have had a relationship for two decades, centered around collaborating on fuel cells, batteries and autonomous driving.

The relationship was expanded to a memorandum of understanding last year on setting up a North American alliance, including working tougher in purchasing and research, as well as sharing platforms, the basic parts on which vehicles are built. Hachigo said Mibe, a research and development expert, was a good person to lead Honda because of his experience in ecological vehicles.

Mibe will continue with the company's belief that "the purpose of technology is to help people," such as reducing carbon emissions and eliminating deaths from traffic accidents, according to Honda. Tokyo-based Honda has said it is striving for the realization of carbon neutrality by 2050. Carbon neutrality refers to net zero carbon dioxide emissions, which will help curtail pollution and global warming.

Along with appointing a new president, Honda said it will also strengthen corporate governance by changing the company structure to that of three committees, overseeing nominating, audit and compensation. The change will better separate the executive and supervisory functions, according to Honda, which makes the Accord sedan, Mirai fuel cell car and Asimo robot.

Hachigo, who has led the company since 2015, said he had kept Honda growing amid an industry undergoing transformation, such as the shift to electric vehicles and away from the gasoline engine. He retires after Mibe formally takes over.

Hachigo noted that Honda's production capacity nearly doubled in the last five years in China, now the world's largest auto market. All the world's automakers have been slammed by the coronavirus pandemic, but Honda has held up relatively well.

Honda recently reported growth in fiscal third quarter profit and raised its annual profit forecast to 465 billion yen ($4.4 billion), up from the previous projection for a 390 billion yen ($3.7 billion) profit. The latest forecast is also better than the 456 billion yen profit Honda earned the previous fiscal year, although Honda warned the outlook remains uncertain because the impact from COVID-29 was still unclear.