Dennis Williams is the 15th person to be charged in an investigation of the union's senior ranks. 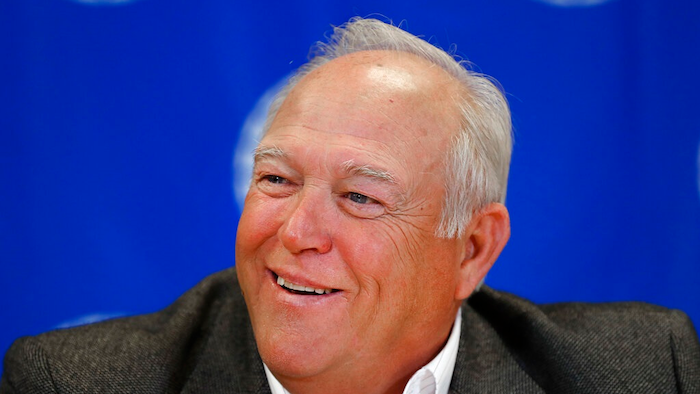 In this Feb. 16, 2017 file photo, then United Auto Workers president Dennis Williams speaks during a roundtable with reporters in Detroit. Williams has been charged with corruption, accused of conspiring with his successor and others to embezzle money for golf, vacation villas and fine dining.
AP Photo/Paul Sancya, File

DETROIT (AP) — A former president of the United Auto Workers union was charged with corruption Thursday, accused of conspiring with his successor and others to embezzle money for golf, vacation villas and fine dining.

Dennis Williams is the 15th person to be charged in an investigation of the senior ranks of the venerable labor union. It has revealed crooked ties between officials and executives at Fiat Chrysler and luxuries rarely enjoyed by the UAW's blue-collar members whose dues were squandered.

The charge against Williams of Corona, California, was filed in federal court in Detroit as a criminal information, which means a guilty plea is likely.

He retired as UAW president in 2018, handing the reins to Gary Jones, who was promoted to the top job from the union's St. Louis-area regional office. Jones pleaded guilty in June.

The allegations against Williams mirror the case against Jones: a brazen scheme to use member dues for villas in Palm Springs, California, boozy meals, premium cigars and golf. The court filing said the conspiracy began in 2010 when Williams was treasurer and continued when he became president in 2014.

Jones filed false vouchers to cover up the conspiracy, according to the government.

More than $22,000 in union money was used to rent a villa for Williams for a four-month period in 2016-17, the charging document states.

In late 2016, the union spent $12,195 to rent a villa for Williams' friends who had no role in UAW business, the government alleged.

A message seeking comment was left for Williams’ attorney.

“The UAW’s members deserve leaders dedicated to serving the members and their families, not serving themselves," U.S. Attorney Matthew Schneider said.

Ten union officials and a late official’s spouse have pleaded guilty since 2017, although not all the crimes were connected. The first wave of convictions, which included some Fiat Chrysler employees, involved money from a Fiat Chrysler-UAW training center in Detroit.

The union reacted with defiant statements during an earlier phase of the investigation, questioning the government’s motives and objecting to a highly publicized search of Jones' home. But the tone eased when Jones quit as president last year and the convictions piled up.

The Williams case “is a sad day for UAW members. But it is also a humbling day of truth and justice demonstrating that no one is above the law, regardless of their position,” the union said.

The union recently said Williams repaid $55,000 in inappropriate travel expenses. Separately, the UAW is selling a lakefront house built for him at a union conference center in northern Michigan.