Sometime Soon, Your Car Will Park Itself

This isn't some far-off technology anymore. 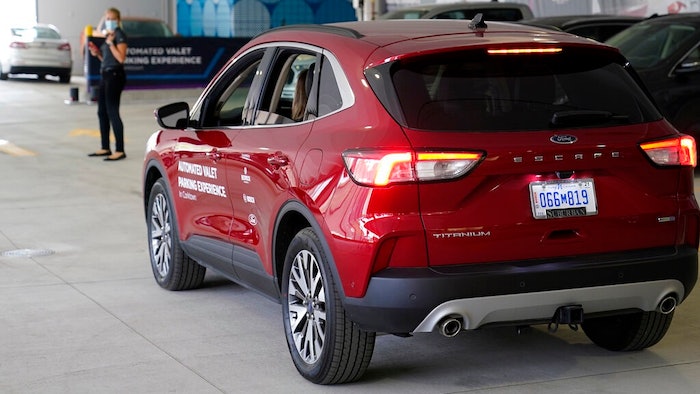 A Ford Escape automatically stops as a pedestrian crosses in front during a self park demonstration, Tuesday, Aug. 25, 2020 in Detroit. Ford, Bosch and real estate company Bedrock are teaming up to test technology that will let vehicles park by themselves in parking decks. The companies are testing the technology using floor-mounted sensors and computers that can control mainly existing features in the Ford Escape. They say the technology is likely to arrive before widespread use of fully autonomous vehicles because sensors and computers inside parking decks can be used.
AP Photo/Carlos Osorio

DETROIT (AP) — So after the coronavirus threat has passed, you head downtown for a baseball game.

You get to the parking garage, and using an app on your phone, you link your SUV to the garage's computers and sensors, and the SUV finds a spot on the fourth floor and parks itself while you catch batting practice.

This isn't some far-off technology anymore. German auto parts maker Bosch is testing it with Mercedes in Stuttgart. And this week it announced a collaboration with Ford at a garage near downtown Detroit.

Although the backers won't say when the technology could be in widespread use, they say it's one benefit from autonomous-car research that is coming sooner rather than later.

“The goal is as soon as practically possible to deliver a safe experience,” says Kevin Bopp, vice president of parking and mobility for Bedrock, the real estate arm of Detroit-based mortgage giant Quicken Loans.

Bopp sees the technology moving from the test to a residential building where selected tenants would be able to summon vehicles for personal use with the custom parking feature. Data would be gathered and problems worked out, and from there, the systems would spread to other smart garages with sensors and computers.

Since doors don't have to be opened and vehicles can be parked closer together, garage operators can park 15% to 20% more vehicles in the same space, reducing the need for garages and allowing precious city space to be turned into parks or other uses, backers say.

The automated valet parking likely will come before widespread use of fully automated vehicles because existing features can be used to move the vehicles without humans behind the wheel, said Greg Stevens, global manager of driver assist technology for Dearborn, Michigan-based Ford. Garages would have varying levels of sensors and computers, he said.

Some vehicle sensors also could be used, but having the garages work with the vehicles is a good solution, Stevens said. “Some garages will be smarter than others, so our vehicles have to be smarter,” he said.

Vehicles would need to be able to stop and start the engine on their own, shift automatically, and have electronically controlled brakes and steering, backers say.

At the Ford-Bosch demonstration this week, workers pulled an Escape into the garage and activated the app. The SUV, with a human safety driver, backed into one parking space by itself, pulled out and backed into another, stopping for a drinking glass that was in the middle of one of the spaces. As it returned to the pickup point, the Escape stopped for a soccer ball that was rolled in front of it.

The tests will determine whether the companies can make a business case to take further steps toward automated parking. So far Ford, Bosch and Bedrock have an agreement for the initial demonstration project, but are eyeing future deals.