The new target is three years earlier than Britain's previous one. 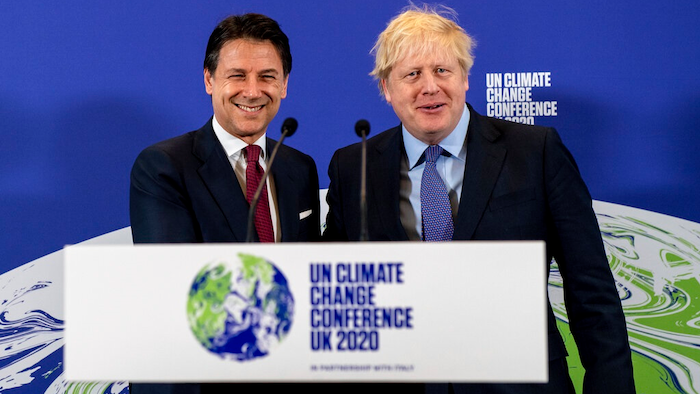 LONDON (AP) — Britain announced Tuesday that it plans to ban the sale of new gas and diesel cars by 2035 — five years earlier than its previous target — in a bid to speed up efforts to tackle climate change.

The announcement was timed to coincide with the launch of Britain's plans for the United Nations' climate summit, known as COP26, which is scheduled to be held in Glasgow in November.

But the U.K. government's commitment to reducing greenhouse gas emissions was questioned by the woman who was appointed by Prime Minister Boris Johnson to head the Glasgow climate summit — and then was fired last week.

Britain has pledged to reduce its net greenhouse gas emissions to zero by 2050. But the government’s advisory Committee on Climate Change has warned that the country's action to slash carbon dioxide and other gases that contribute to global warming is lagging far behind what is needed.

The U.K.'s new 2035 target for ending gas and diesel car sales is one of the world's more ambitious. Several countries, including France, plan to stop by 2040. Norway — one of the most aggressive early adopters of electric cars — has a goal, but not a requirement, to eliminate petrol and diesel cars, excluding hybrids, by 2025.

The U.K. says it will bring in a ban on fossil-fuel cars and vans even earlier than 2035 “if a faster transition is feasible.” The ban will also include hybrid vehicles.

But environmental groups said Britain's goal was not ambitious enough.

Rebecca Newsom, head of politics at Greenpeace U.K., said “phasing out the internal combustion engine faster is an important piece of the puzzle.”

“However, pushing the date later than 2030 would vastly reduce the chances of meeting our climate targets, and the potential to deliver thousands of electric vehicle manufacturing jobs,” she said.

The auto industry reacted coolly to the announcement. Mike Hawes, chief executive of the Society of Motor Manufacturers and Traders, said the automakers were already moving toward “a zero emissions future,” and said the government had “moved the goalposts for consumers and industry.”

Johnson kicked off a year of buildup to the climate conference Tuesday alongside naturalist David Attenborough and Italian Prime Minister Giuseppe Conte at London's Science Museum. Italy is hosting a preparatory meeting for the conference.

The British prime minister said the world had seen "a catastrophic period of global addiction to hydrocarbons that got totally out of control."

“We have to deal with our CO2 emissions. And that is why the U.K. is calling for us to get to net zero as soon as possible, for every country to announce credible targets to get there — that's what we want from Glasgow,” Johnson said. "And that's why we have pledged here in the U.K. to deliver net zero by 2050."

Britain’s tenure at the helm of COP26 is getting off to a rocky start. On Friday, Johnson sacked O’Neill, a former British government minister appointed last year to head up the event.

The Conservative government said it had decided that a current government minister should fill the role, but gave no reason for the change of heart. A replacement has not been announced.

O’Neill strongly criticized the prime minister in a letter published Tuesday in the Financial Times.

“When you asked me to be your COP President … you promised to ‘lead from the front’ and asked me what was needed: ‘money, people, just tell us!’” she wrote. “Sadly, these promises and offers are not close to being met."

O'Neill said the Cabinet sub-committee on climate that Johnson promised to chair has not met even once.

“You had a vision for Brexit and you got Brexit done. As I write, we have less than 7,000 hours before the start of COP26, where we have a chance to set a new global vision for climate recovery and build a new consensus for global climate action. Please get this done too,” O'Neill wrote.