Fiat Chrysler US posted just over $1 billion in one-time pretax charges, including an $848 million adjustment for recalls and $159 million for vehicles damaged in a Chinese port explosion last August. 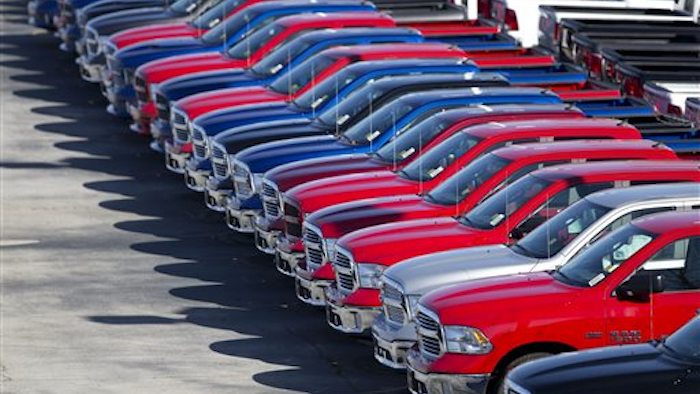 The Auburn Hills, Michigan, company says its net profit was $70 million from July through September compared with $611 million a year ago.

Fiat Chrysler US posted just over $1 billion in one-time pretax charges, including an $848 million adjustment for recalls and $159 million for vehicles damaged in a Chinese port explosion last August.

Without the charges the company would have had a modified operating profit of nearly $1.3 billion, 34 percent higher than a year ago.

The company relied on its booming Jeep brand for worldwide sales and revenue increases. Revenue rose 5 percent to $21.8 billion. Vehicle sales worldwide for the unit, known as FCA US LLC, rose to 737,000 for the quarter, up 4 percent. Jeep sells only SUVs, which are in high demand in the U.S. and worldwide as buyers pick them over sedans.

In July, FCA US reached agreement with the U.S. National Highway Traffic Safety Administration to buy back from customers more than 500,000 Ram pickup trucks and other vehicles in the biggest such action in U.S. history. In addition, owners of more than a million older Jeeps with vulnerable rear-mounted gas tanks will be able to trade them in or be paid by Chrysler to have the vehicles repaired.

The recall actions were part of a costly deal with safety regulators to settle allegations of misconduct in 23 recalls covering more than 11 million vehicles. The company also is under investigation by NHTSA for failing to report traffic deaths involving its cars to the agency in a timely manner.

Fiat Chrysler US faced a record civil fine of up to $105 million. It set aside money for that in the second quarter.

The Ram pickups, which are the company's top-selling vehicle, have defective steering parts that can cause drivers to lose control. Some previous repairs have been unsuccessful, so Fiat Chrysler agreed to the buyback. Owners also have the option of getting them repaired.

The older Jeeps have fuel tanks located behind the rear axle, with little to shield them in a rear crash. They can rupture and spill gasoline, causing a fire. At least 75 people have died in crash-related fires, although Fiat Chrysler maintains they are as safe as comparable vehicles from the same era.

The company reports results separately from its parent, Fiat Chrysler Automobiles NV, which said last week that the recall costs pushed it to a net loss of 306 million euros ($339 million). The mass-market carmaker, which is spinning off its sports car unit Ferrari, said the quarterly loss compared with a net profit of 174 million euros for the same period last year.