Union leaders explained the four-year pact to factory-level union representatives at a meeting Friday in Detroit and local leaders voted to recommend that members pass it. 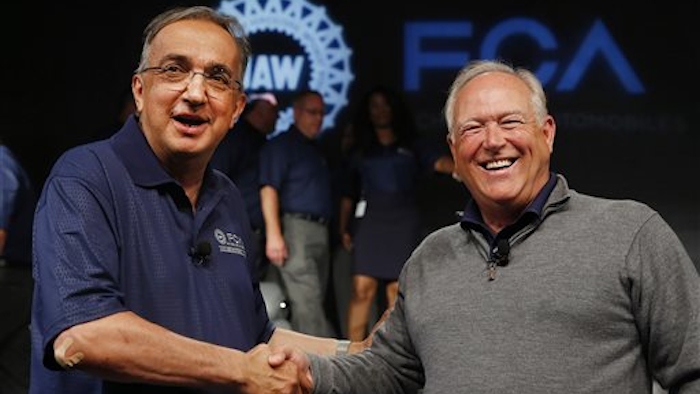 DETROIT (AP) — Hourly pay, profit sharing and performance bonuses will rise, but car production will move to lower-cost Mexico and be replaced by trucks and SUVs under a new contract between Fiat Chrysler and the United Auto Workers.

Union leaders explained the four-year pact to factory-level union representatives at a meeting Friday in Detroit and local leaders voted to recommend that members pass it.

The deal, reached Tuesday, has been criticized by some workers on social media sites, but UAW President Dennis Williams said it achieves union goals of giving entry-level workers a path to higher pay, rewarding members for sacrifices made while FCA struggled financially, and dealing with escalating health care costs.

Here are some details from the agreement, which was distributed to UAW members Friday evening:

— Pay raises for longtime workers: Those hired before 2007 would go from $28.50 per hour to $30 per hour during the four-year contract. They haven't had raises in more than a decade, although they have received profit-sharing checks.

— Pay raises for entry-level workers: Those hired in 2007 or later who now make about half the wages of longtime workers would see starting pay go from $15.28 per hour to around $17. Top pay would go from $19.28 to $25.35 after three years. About 45 percent of FCA workers are paid the lower wage.

— Profit sharing: All workers get bigger checks than in the past, dependent on Fiat Chrysler's North American full-year profit margins. Workers will get $800 for every 1 percent of profit margin once the company hits 2 percent. Profit margins are the percent of revenue that the company gets to keep. Last quarter, the margin was 7.7 percent. If FCA could sustain that for a full year, workers would get $6,160. Entry-level workers could get more in their checks to help bridge the pay gap with longtime workers. They'd get another $1,000 if margins hit 8 percent, $2,000 for 9 percent and $4,000 for 10 percent. Workers get nothing if margins don't hit 2 percent, insulating the company from added costs in bad times.

— Other incentives: Bonuses for meeting certain quality and performance metrics would be increased. Although not guaranteed, the union says they could range from $4,000 to $13,000 per employee over four years.

— Cars lost, trucks and SUVs gained: To help pay for the raises and reduce FCA labor costs, car production with lower profit margins would be shifted to Mexico, where auto assembly wages are around $6 per hour. Plants that lose car production would start making SUVs and trucks, including new products to preserve jobs.

— Signing bonus: Workers would get $3,000 if contract is ratified.

— Health care: Stays the same initially. But there's agreement in principle to form a giant health care pool to get bulk discounts from health care providers. Pool could include the UAW-run trust that pays bills for 600,000 retirees and spouses, plus 551,000 active employees and families from FCA, GM and Ford. Details to be worked out. Williams hinted earlier in the week that health care could be resolved outside of the contracts.

Contracts with all three Detroit-area automakers expired Monday, but workers stayed on the job under extensions. Parts of the Fiat Chrysler deal will serve as a template for negotiations with the other companies.

Bargaining with Ford Motor Co. and General Motors Co. will begin in earnest soon. Williams said the other companies make more money than FCA and have more ability to pay workers. But the companies want to cut their labor costs because they're now higher than foreign automakers with U.S. factories, like Toyota.