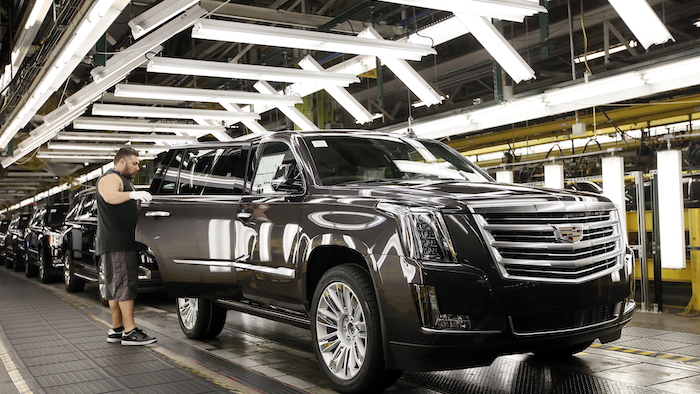 The Detroit company made 67 cents per share from April through June compared with 11 cents a year ago. The year-earlier quarter included $1.5 billion in expenses for a string of safety recalls. GM's $2.8 billion pretax profit in North America was a second-quarter record.

The strong profits helped GM distance itself from the recalls. Still, the company raised its estimate for what it will spend to compensate victims of crashes caused by defective ignition switches to $625 million. Previously GM had expected to pay up to $600 million.

GM also said Thursday that it expects pretax profits to be better in the second half than the first, when it made $5 billion. Shares jumped 6 percent in premarket trading.

Faulty ignition switches that can unexpectedly shut off engines in older GM small cars are responsible for at least 124 deaths and 269 injuries, according to a fund set up by the company to compensate victims.

GM's sales in China fell 1 percent during the quarter as the market slowed, and its sales increase of 1.9 percent in the U.S. trailed the industry's overall gain. But the company said its sales were highly profitable, with SUVs and pickup trucks bringing in more dollars per vehicle. Kelley Blue Book estimated GM's average U.S. selling price at $37,025 for the quarter, up 3.3 percent from a year ago.

In China, GM introduced two new SUVs during the quarter, helping to boost sales, Chief Financial Officer Chuck Stevens said. "Our SUV sales across the business are up more than 80 percent," he said. The company also cut costs and became more efficient in China, where it will continue to invest in new products despite slowing growth, he said.

So far this year, GM has spent $2.1 billion buying back its shares and has spent $1.1 billion on dividends. Under pressure from activist investors, GM agreed to repurchase $5 billion worth of its shares by the end of 2016.

GM shares rose $1.86 in premarket trading to $32.16. They have fallen 13 percent since the beginning of the year, while the Standard & Poor's 500 index has climbed roughly 3 percent. The stock has declined 17 percent in the last 12 months