India SUV Maker Rides Into U.S. Market ... On A Scooter

If buyers like it, Mahindra could use the GenZe as a springboard into the car market, just as Honda made the leap from motorcycles to cars here in the 1970s. 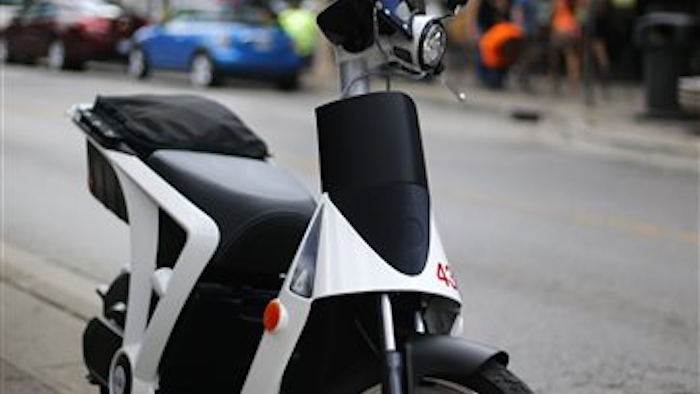 ANN ARBOR, Mich. (AP) — India's largest SUV maker is ready to make its debut on U.S. roads. But it's starting with two wheels, not four.

Mahindra hopes to win over city and campus dwellers with a $2,999, Vespa-like electric scooter called the GenZe, which goes on sale this fall in California, Oregon and Michigan. Sales could soon expand to other states and Europe.

If buyers like it, Mahindra could use the GenZe as a springboard into the car market, just as Honda made the leap from motorcycles to cars here in the 1970s.

The strategy has some risks. Scooters have never been as popular in the U.S. as elsewhere — people in China buy as many electric scooters in a day as Americans do in a full year, for example. And consumers might not trust Mumbai-based Mahindra, which scrapped an attempt to sell vehicles here five years ago because it couldn't meet U.S. safety standards.

"The pressure has really been on to make sure that we get this right," says Terence Duncan, the head of customer engagement for the GenZe and one of its chief designers. "What we're doing, really, is introducing the brand to American customers."

To appeal to skeptics, Mahindra designed the GenZe in Silicon Valley with features favored by tech-savvy Millennials, like a secure laptop charging port under the seat. It opened its four stores in San Francisco and Portland because buyers there are more accepting of two-wheeled transportation. In Michigan, buyers can get a GenZe at the Ann Arbor factory where it's made.

The GenZe only goes up to 30 miles per hour, so riders won't need a motorcycle license. Its most innovative feature is a 28-pound removable battery, which riders can unhook and carry inside to charge. The battery takes 3.5 hours to fully charge, and the scooter goes for 30 miles on a charge. A 7-inch touchscreen display tells drivers their speed and range.

Only about 5,000 electric scooters will be sold in the U.S. this year, according to Ryan Citron, who analyzes the market for the consulting company Navigant Research. Among them: the ZEV 2700 and the Bravo EVT-168, which cost about the same as the GenZe. By comparison, 30,000 will be sold in Europe and 3.9 million in China, where electric scooters cost less than half the price of a GenZe because they use a cheaper type of battery.

Citron says about 46,000 gas-powered scooters will be sold in the U.S. this year. Any scooter has a tough time selling when gas prices are relatively low, he says.

Citron believes the electric scooter market will grow to around 20,000 annual sales by 2024 as companies like Mahindra and Oregon's Boxx Corp. enter the market. Another one to watch is Gogoro, a Taiwan-based scooter maker that wants to develop stations where riders can swap out batteries.

Mahindra is targeting college campuses and also plans to supply scooter-sharing programs like Scoot. So far, it has around 300 GenZe orders from people who paid a $100 deposit. The company expects to make around 3,000 scooters in the first year, Duncan says.

This isn't Mahindra's first attempt to crack the U.S. car market. The $16.9 billion conglomerate, which controls about 40 percent of the SUV market in India, began courting U.S. dealers about a decade ago with the promise of delivering vehicles by 2009. But Mahindra had trouble meeting U.S. vehicle regulations and canceled its plans in 2010.

Mahindra does sell tractors in the U.S., but wants to build its name in urban areas, says GenZe CEO Vish Palekar. So in 2012, it set up a small group in Palo Alto and told them to come up with a vehicle that would get people around cities more easily.

"If we're going to be relevant here, we need to create something transformative," Palekar said.

Mahindra hopes that eventually leads to the four-wheel market. It would be logical to target GenZe buyers with vehicles like the Reva e20 electric car, which will soon launch in Europe.

Executives are tight-lipped about their plans, but Mahindra has already opened a Detroit-area tech center that's working on bringing its vehicles up to U.S. safety standards.