That Alero sedan represented the send-off to a nameplate founded in the city more than a century ago by the son of a machinist. 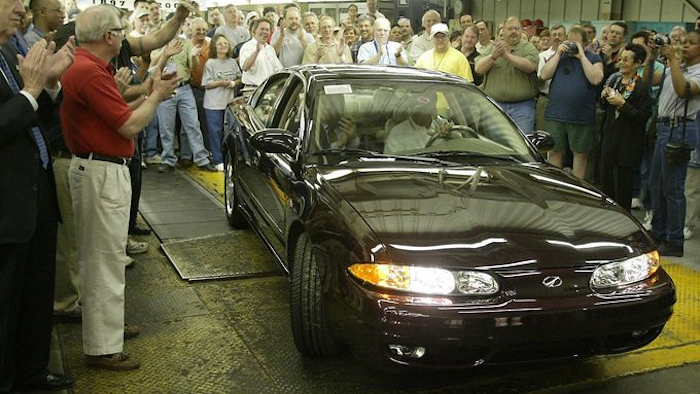 LANSING, Mich. (AP) -- It was 10 years ago this coming Tuesday that the final Oldsmobile drove off the line at General Motors' Lansing Car Assembly plant.

That Alero sedan represented the send-off to a nameplate founded in the city more than a century ago by the son of a machinist.

It was a bitter farewell, the Lansing State Journal reports (http://on.lsj.com/1mNdOJ0), but one tempered by the promise of new car industry jobs in Lansing for years to come in the form of new plants making other GM brands.

The Detroit automaker was criticized locally for killing the Oldsmobile division, but it might have turned out to be a blessing in disguise.

As the State Journal points out, Lansing's auto economy no longer is tied to the success or failure of any one brand.

The Lansing Grand River and Delta Township assembly plants, plus a stamping plant and a warehouse operation employ thousands. The assembly plants, still GM's newest in North America, build cars and crossovers and can be adapted to make a variety of vehicle and body styles.

By 2000, GM said it was ready to close the door on Oldsmobile. Other divisions — Pontiac and Saturn — followed. Still others, such as Saab and Hummer, would be sold off.

GM now has four nameplates, all of which have at least one vehicle built in Lansing: Buick, Cadillac, Chevrolet and GMC.

"It took a lot for people here to get the mindset to get over the loss of Oldsmobile," Lansing Mayor Virg Bernero said. "It was the end of an era. The end of Oldsmobile wasn't the end of GM."

The dark cherry Alero that left the line April 29, 2004, did so with Lansing Car Assembly's two most senior employees behind the wheel. Thousands of people signed their names underneath the hood.

That Alero was on display at the R.E. Olds Transportation Museum in Lansing for several years. It now has a permanent residence in GM's Heritage Center in Sterling Heights.

"Their goal was to build the vehicle with the same level of quality that the first one off the line came with — a lot of, 'Let's make this one the best,'" said GM spokeswoman Kim Carpenter, who worked in Lansing's plants at the time.

"In my opinion, they identified with being world-class automakers," Carpenter said. "For them, the brand was vitally important, but they knew other opportunities would come."

Hyundai and SOSLAB are working on joint development of LiDAR for mobile robots.
May 19th, 2022
Follow Us
Most Recent