Toyota closed its factory in Melbourne on Tuesday, ending 54 years of production by the Japanese firm in Australia. 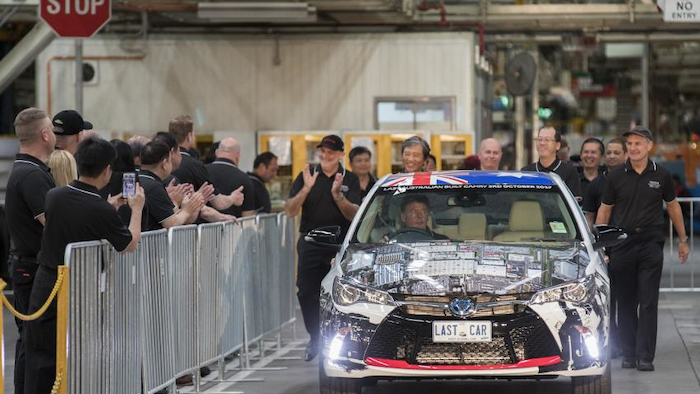 After looming for four years, "Carmageddon" has hit the Australian auto industry.

Toyota closed its factory in Melbourne on Tuesday, ending 54 years of production by the Japanese firm in Australia, the first country outside of Japan where the company made cars.

Ford Motor Co., which pioneered Australian-based auto making in 1925, heralded its end in 2013 by announcing it would close its last two Australian manufacturing plants in 2016.

General Motors-owned Holden followed suit several months later by announcing it, too, would close down. With the loss of those two firms making the supply of locally-produced auto components unsustainable, Toyota reluctantly soon followed.

Toyota Motor Corp. has been Australia's biggest auto manufacturer for the past decade, with 70 percent of its cars exported, mostly to the Middle East. Output at the Melbourne plant peaked in 2007, when it made 149,000 cars.

"It's sunk in now. I couldn't sleep last night," Michael Spiteri, who worked at the plant for 23 years, told Fairfax media.

The closure of the Holden plant will eliminate another 3,000 jobs.

Industry analysts forecast the loss of thousands more jobs in auto-related industries. Research by the University of Adelaide has predicted a worst-case scenario of 200,000 lost jobs nationwide due to the auto industry's collapse, which would take $AUD29 billion ($22.6 billion) out of Australia's GDP annually. 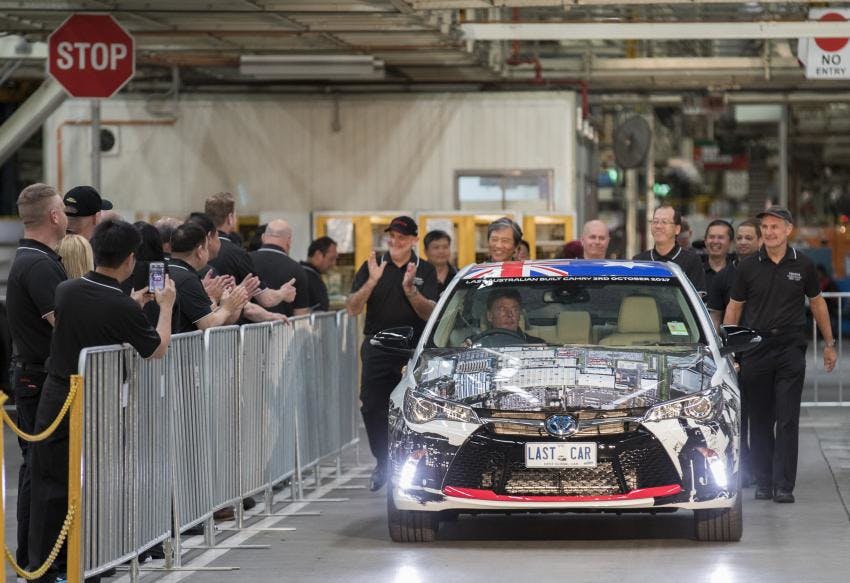 Professor John Spoehr, who co-authored the University's report, said the plant closings and resulting loss of supply chains will have a wide impact.

"We haven't seen in recent history the collapse of an entire industry, but that's what is happening," Spoehr told The Associated Press.

The factory closings have raised pressure on Australia's conservative government over job losses.

"This is a sad day for these thousands of workers and their families, and it's a sad day for Australia," Federal Opposition Leader Bill Shorten said Tuesday. "Other countries, including the U.S., Germany and Sweden, contribute much more than Australia per capita to their car industries."

"People stopped buying the sedans being made in Australia," he said. "The manufacturers who've progressively closed their operations in Australia have made it clear it's not because of a failure of government subsidies."

When Toyota announced it would close the Melbourne plant, it blamed the "unfavorable Australian dollar," high manufacturing costs and meager economies of scale in Australia, a country of only 23 million people.

The global management consulting firm Boston Consulting Group ranks Australia the worst performer among 25 nations assessed in its worldwide manufacturing cost-competitiveness index. Costs are higher than in Germany, the Netherlands and even Switzerland, and Australian manufacturing wages rose 48 per cent in the past decade while productivity fell, it says. Meanwhile, car output dropped by nearly half from about 400,000 cars in 2004.

The Toyota plant's closure was "a terribly sad day for the whole country, and a tough blow for the thousands of affected workers and their families," Smith said.

"This plant is more than just a car plant for them," he said. "It's a passion, it's a part of their lives."