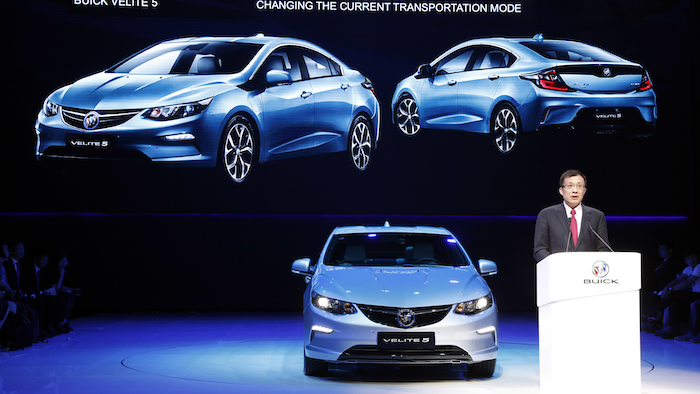 GM president Wang Yongping announces the global launch of the Buick Velite 5, an extended range electric hybrid, during a global launch event ahead of the Shanghai Auto 2017 show in Shanghai, China, Tuesday, April 18, 2017. At the auto show, the global industry's biggest marketing event of the year, almost every global and Chinese auto brand is showing at least one electric concept vehicle, if not a market-ready model. (AP Photo/Ng Han Guan)

Volvo Cars, the Chinese-owned Swedish automaker, said Wednesday it plans to make electric cars in China for sale worldwide starting in 2019 amid pressure by Beijing for global auto brands to help develop its fledgling industry in alternatives to gasoline.

The announcement at the Shanghai auto show is among a flurry of automakers' plans for electric models in China, their industry's biggest market. The ruling Communist Party has the world's most aggressive electric vehicle goals, both to clean up smog-shrouded cities and seeking the lead in an emerging industry.

On Tuesday, General Motors Co. said it will produce a gasoline-electric hybrid version of its Chevrolet Volt in China. Ford, Volkswagen AG, Nissan Motor Co. and other brands also intend to sell electric models in China, adding to competition in a market that has been dominated by lower-cost Chinese producers.

Volvo said its first pure-electric model will be based on the economy-size CMA platform it shares with Chinese automaker Geely, which bought the Swedish brand from Ford in 2010. It said the name, size and other details were yet to be decided.

"It will be for global export. So it is built from the start to work all over the world," said Henrik Green, Volvo's senior vice president for research and development.

Volvo has three factories in China. In 2015 it became the first automaker to export Chinese-made cars to the United States.

Chinese buyers have shown little enthusiasm for electric cars due to concern about cost, reliability and limited range. But Chinese authorities are using a mix of incentives and penalties to push for electric models. Automakers are scrambling to develop models with consumer appeal.

"It's clear that China wants to take a leading role globally in terms of the regulatory environment and electrification," said David Schoch, Ford's president for the Asia-Pacific. 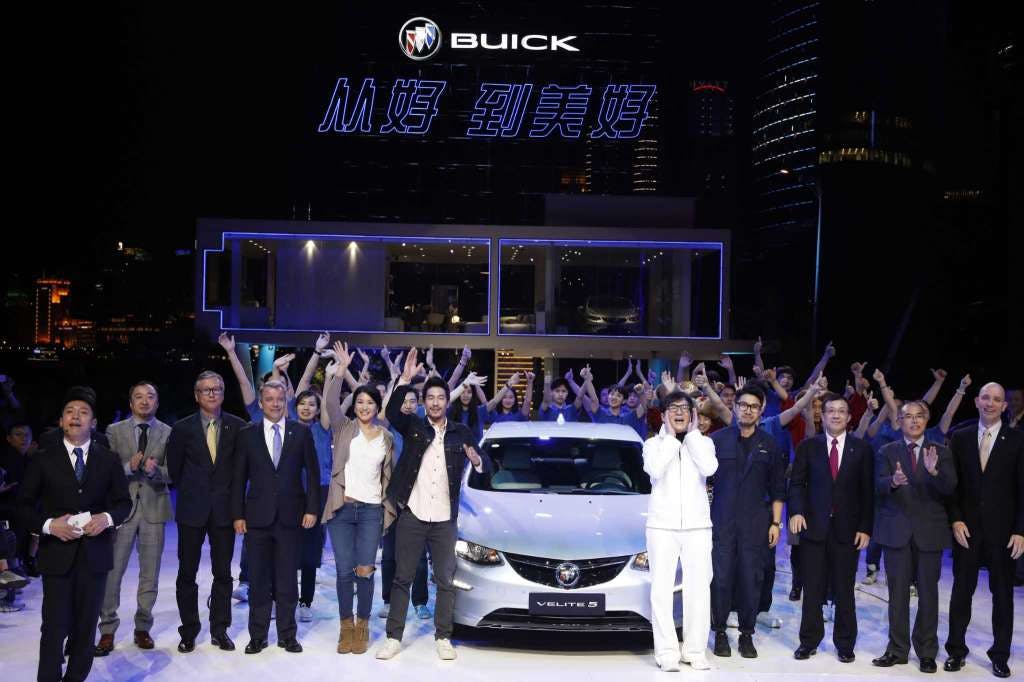 Movie star Jackie Chan in white attends the global launch of the Buick Velite 5, an extended range electric hybrid ahead of the Shanghai Auto 2017 show in Shanghai, China, Tuesday, April 18, 2017. At the auto show, the global industry's biggest marketing event of the year, almost every global and Chinese auto brand is showing at least one electric concept vehicle, if not a market-ready model. (AP Photo/Ng Han Guan)

Models on display at Auto Shanghai 2017, the global industry's biggest marketing event of the year, reflect the conflict between Beijing's ambitions for environmentally friendly cars and Chinese consumers' love of hulking, fuel-hungry SUVs.

Nearly every automaker is displaying at least one electric concept vehicle, if not a market-ready model. They range from family-friendly SUVs to futuristic-looking, premium-priced electric muscle cars from Chinese startups such as NextEV and Qiantu.

GM said its Velite 5 hybrid will be sold by Buick, which has modest sales elsewhere but is GM's main brand in China. GM's joint venture with a state-owned automaker, Shanghai Automotive Industries Corp., will make it. Prices will start at 265,800 yuan ($38,600).

On Tuesday, Volkwagen AG announced plans to launch a pure-electric car in China next year with a state-owned partner. It is to be the first in a full range of pure-electric vehicles for China.

Ford announced plans earlier to manufacture a hybrid sedan, the Mondeo Energi, with a state-owned Chinese partner, Chang'an Automobile Co. It is due to go on sale next year.

One brand still displaying only classic gasoline models was Italy's Maserati, whose CEO, Reid Bigland, would not say if it might produce an electric or hybrid. China is the biggest market for Maserati's top-of-the-line Quattroporte sedan and the brand's total Chinese sales rose 90 percent last year to 12,250. 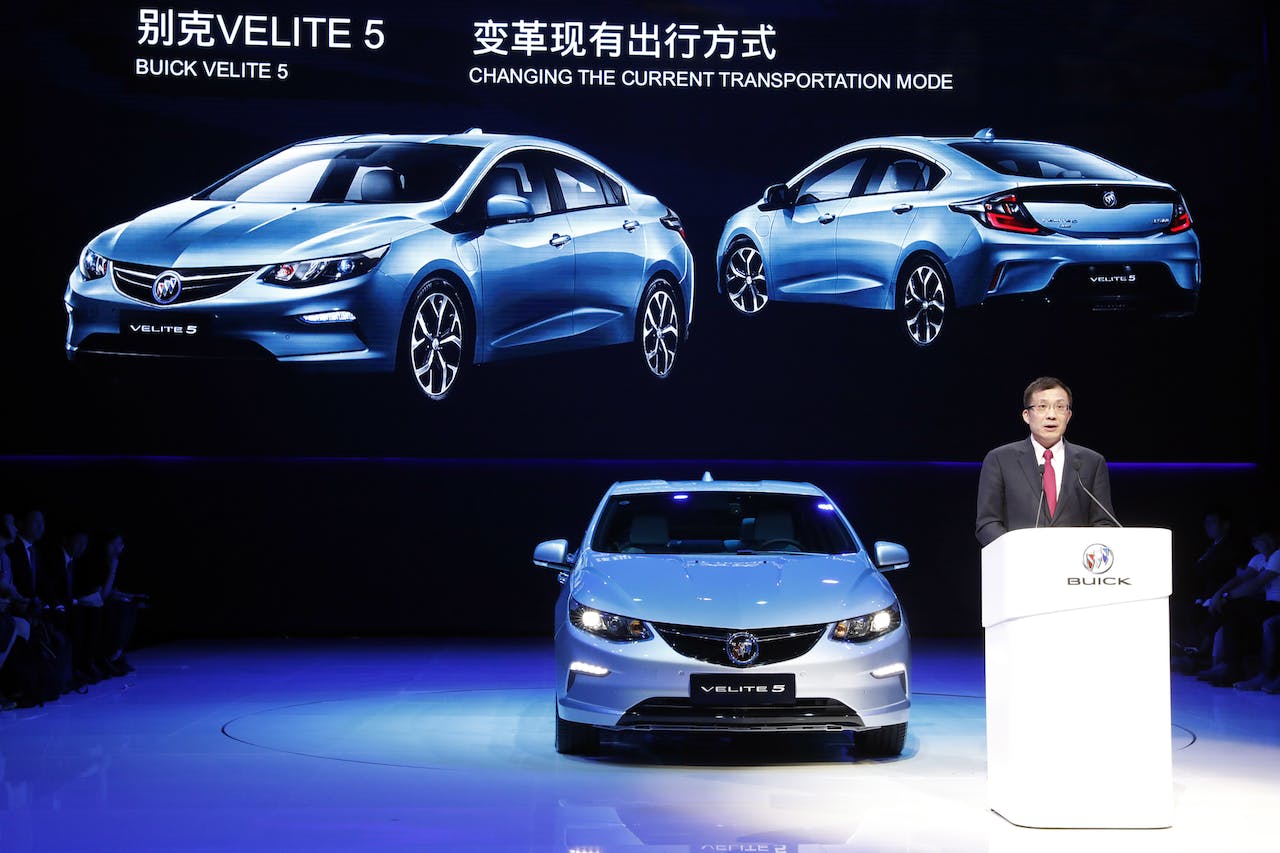 GM president Wang Yongping announces the global launch of the Buick Velite 5, an extended range electric hybrid, during a global launch event ahead of the Shanghai Auto 2017 show in Shanghai, China, Tuesday, April 18, 2017. At the auto show, the global industry's biggest marketing event of the year, almost every global and Chinese auto brand is showing at least one electric concept vehicle, if not a market-ready model. (AP Photo/Ng Han Guan)

Regulators jolted the industry by proposing a requirement that electrics account for at least 8 percent of each brand's production by next year, rising to 10 percent in 2019 and 12 percent in 2020. Automakers say they may be unable to meet those targets and regulators have suggested they might be reduced or postponed.

The government is expanding China's network of charging stations to reduce "range anxiety," or buyers' fear of running out of power. The Cabinet's planning agency announced a goal in February of having 100,000 public charging stations and 800,000 private stations operating by the end of this year.

Electric cars also are exempt from sales tax and license plate quotas Beijing, Shanghai and other cities use to curb congestion and smog. Still, sales of electric and gasoline-electric hybrids fell 4.4 percent from a year earlier in the first quarter to 55,929 vehicles while SUV purchases rose 21 percent to 2.4 million.

Ford's Schoch said that as manufacturing volume of batteries — an electric car's most expensive component — expands, costs should fall, making them competitive with combustion engines.

"That will create a market pull rather than the government forcing action," he said.

The status of manufacturing electric cars in China is unclear for foreign brands, which are required to work through joint ventures with state-owned Chinese partners that assemble their vehicles.

Previous rules required foreign automakers to hand over key technology to a Chinese partner or pay import taxes even on models produced in China. Foreign companies balked at giving away expensive know-how that might help a potential competitor to develop.

Volvo's status is unusual. Its Chinese ownership makes it exempt from a requirement to work with a local joint venture partner. But Geely chairman Li Shufu has said he wants its Swedish managers to operate independently.

Volvo has said it hopes to sell a total of 1 million electric and gasoline-electric hybrid vehicles by 2025. The company says it plans to develop plug-in hybrid versions of all its models.

Regulators have eased some regulations in an effort to encourage foreign companies to play a bigger role in developing the Chinese industry but manufacturers say they are waiting to see the final requirements.