The Vermonter, carrying 98 passengers, hit rocks that had fallen onto the tracks. 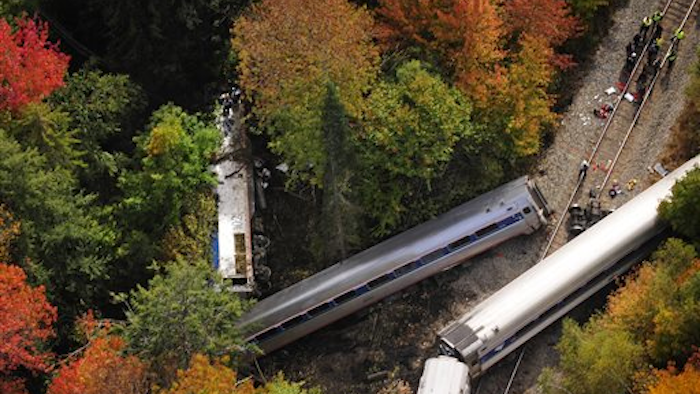 The National Transportation Safety Board is now investigating the derailment in central Vermont of a Washington, D.C.-bound Amtrak train after it hit rocks that had fallen onto the tracks, sending two cars down an embankment and injuring seven people, the head of Amtrak said Tuesday.

Amtrak CEO Joseph Boardman said the person most seriously injured in the Monday derailment of the Amtrak Vermonter, a conductor who had been riding in the locomotive alongside the engineer, had been released from the hospital.

Boardman said at a news conference he felt "very blessed and thankful" none of the injuries were more severe.

Boardman said it would be up to the NTSB to recommend ways to avoid future accidents after completing its investigation. He did not know how long the investigation would take.

For years the state of Vermont has trimmed ledge away from highways, but debris still occasionally falls onto the roads, Gov. Peter Shumlin said.

In some parts of the country, likely slide areas are equipped with a "slide fence," a barrier that would detect falling debris and then send an alert to a control point, he said.

"Whether it would work here or not it's unclear, I don't know," Boardman said.

He did say such systems are used in New York state.

The Vermonter, carrying 98 passengers and four crew members, had been on the tracks for about 90 minutes when it hit rocks that had fallen from a ledge onto the tracks in Northfield, about 20 miles southwest of Montpelier at around 10:30 a.m. Monday.

The locomotive and one of the passenger coaches tumbled down an embankment. Three passenger cars left the tracks but remained upright.

Passenger Bob Redmond, of Bay City, Michigan, was taking a foliage tour when the train derailed. He looked outside the window and saw the car that had been ahead of his was now alongside him.

"It was just going the other way, and we started tipping sideways and down we went," he said.

Federal records show two companies that have operated that stretch of track have had four accidents since 2006 that could have involved debris on the tracks.

Federal safety rules for tracks that carry passengers require at least two inspections every week, with at least one day between inspections. State officials said a freight train had passed over the tracks Sunday night with no problems.

Numerous derailments around the world have been caused by debris on tracks, many linked to heavy rains that trigger slides. In 2010, a train in Beijing hit mounds of debris left on the track following a landslide, killing 19 people.

The region near Monday's derailment received 2.5 inches of rain between Thursday and Friday, the National Weather Service said.

Amtrak planned to bus passengers booked on the Vermonter to and from Springfield.