The train headed from Vermont to Washington, D.C., derailed after striking rocks. 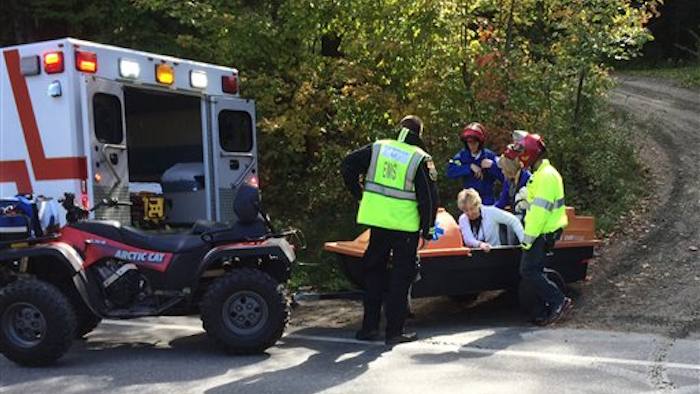 An Amtrak train headed from Vermont to Washington, D.C., derailed in central Vermont on Monday after apparently striking rocks that were on the tracks. No life-threatening injuries were reported.

The Vermonter train derailed near Roxbury, about 20 miles southwest of Montpelier.

Montpelier Fire Department spokeswoman Dana Huoppi told WPTZ-TV: "There are some people that are shaken up, but it sounds like they are only going to transport four by ambulance at this time."

The 13-hour, 45-minute daily trip begins in St. Albans in northern Vermont. The route passes through cities including Burlington, Vermont, Springfield, Massachusetts, and New York, with D.C. as the final destination.

Amtrak said in a statement that the train "reportedly" struck a rock slide on the tracks and that no critical injuries had been reported.

Judy Tartaglia, CEO of Central Vermont Medical Center, said six people were transported to the emergency room for minor injuries including neck, back and shoulder pain, lightheadedness and a wrist injury. She said she doesn't expect any more patients.

At least several dozen passengers were loaded onto school buses to be taken to an armory at nearby Norwich University.

Matthew Lehner, a spokesman for the Federal Railroad Administration, said it was aware of the derailment and had sent investigators to the scene.

Vermont State Police and local fire and rescue agencies responded to the derailment, and numerous emergency vehicles were at the site.

The governor's office said officials would hold a news conference Monday afternoon to update on the derailment.