"We are asking, I am asking for your trust on our way forward," he said. "We will clear this up." 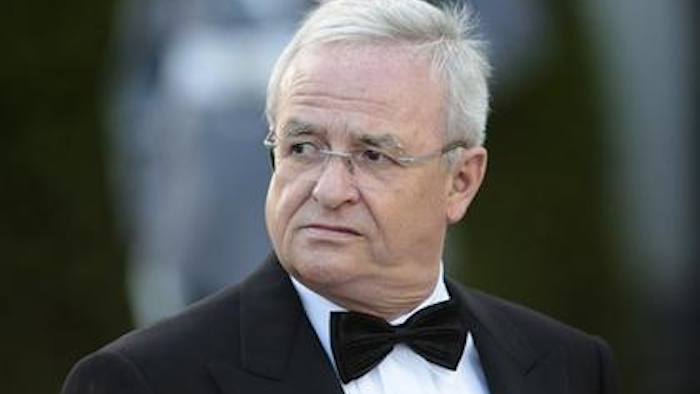 Volkswagen AG's emissions scandal crisis escalated Tuesday as the company issued a profit warning, set aside billions to cover the fallout and lost billions more in market value. VW's CEO said he is "endlessly sorry" that the world's top-selling carmaker squandered worldwide trust in its brand.

The rapid-fire developments came as Volkwagen stunningly admitted that some 11 million of the German carmaker's diesel vehicles worldwide contain software that evades emissions controls, not just the half a million cars that the U.S. Environmental Protection Agency said violate the Clean Air Act.

As its share price sunk for a second straight day, Volkswagen said it was setting aside around 6.5 billion euros ($7.3 billion) to cover the fallout. CEO Martin Winterkorn apologized for the deception under his leadership and pledged a fast and thorough investigation, but gave no indication that he might resign.

"Millions of people across the world trust our brands, our cars and our technologies," Winterkorn said Tuesday in a video message. "I am endlessly sorry that we have disappointed this trust. I apologize in every way to our customers, to authorities and the whole public for the wrongdoing."

"We are asking, I am asking for your trust on our way forward," he said. "We will clear this up."

VW has yet to explain who installed the software, under what direction, and why.

"I do not have the answers to all the questions at this point myself, but we are in the process of clearing up the background relentlessly," Winterkorn said.

The damage to Volkswagen's reputation was reflected in the market's response. Volkswagen's share price slid a further 16.8 percent Tuesday to close at 111.20 euros, on top of Monday's 17 percent decline.

The trigger to the company's market woes was last Friday's revelation from the EPA that VW rigged nearly half a million cars to defeat U.S. smog tests, exposing the carmaker to potential fines of $37,500 per vehicle, and anyone found personally responsible to $3,750 per violation.

After blaming unrelated issues for more than a year, the company finally told U.S. regulators that it installed software that switches engines to a cleaner mode during official emissions testing. The software then switches off again on the road, enabling cars to drive more powerfully while emitting as much as 40 times the legal pollution limit.

"Let's be clear about this. Our company was dishonest. With the EPA, and the California Air Resources Board, and with all of you. And in my German words, we have totally screwed up," the head of Volkswagen's U.S. division, Michael Horn, said Monday while unveiling a new Passat model in New York.

"We must fix those cars to prevent this from ever happening again, and we have to make things right. With the government, the public, our customers, our employees, and very importantly, with our dealers."

The shockwaves were felt across the sector as traders wondered who else may get embroiled. Germany's Daimler AG, the maker of Mercedes-Benz cars, was down 7 percent Tuesday, while BMW AG fell 6 percent. France's Renault SA was 7.1 percent lower.

In a statement Tuesday, Volkswagen admitted that "discrepancies" related to vehicles with Type EA 189 engines actually involve some 11 million vehicles worldwide — more than the 10 million or so cars it sold last year.

"Manipulation at Volkswagen must never happen again," Winterkorn said in his video message.

Volkswagen has more than 600,000 employees "building the best vehicles for our customers," he added. "It would be wrong to place the hard and honest work of 600,000 people under general suspicion because of the grave mistakes of a few."

The scandal is hugely damaging in an industry that relies on reputations for trustworthiness.

"Brands are all about trust and it takes years and years to develop. But in the space of 24 hours, Volkswagen has gone from one people could trust to one people don't know what to think of," said Nigel Currie, an independent U.K.-based sponsorship and branding consultant.

The company said the 6.5 billion euros it is setting aside this quarter will cover necessary service measures and "other efforts to win back the trust" of customers. It didn't mention possible fines or penalties. The violations described by the EPA could, in theory, total about $18 billion.

Christian Stadler, professor of strategic management at the Warwick Business School, expressed surprise at the scale of this scandal, but said companies rarely pay maximum fines under U.S. regulations.

"I don't think this is a life-threatening event but it's clear it's going to be very expensive," he said.

VW conceded that the costs it is booking in the third quarter are "subject to revaluation" in light of its investigations and that 2015 earnings targets will be adjusted. It didn't specify by how much.

The company hasn't revealed the results of internal investigations, although it has said that the software in question was installed in other vehicles with diesel engines, and asserted that in most cases, it "does not have any effect."

It also said new vehicles with EU 6 diesel engines currently on sale in the European Union comply with legal requirements and environmental standards.

"I hope that the facts will be put on the table as quickly as possible," German Chancellor Angela Merkel said in Berlin.

Before the scandal, Winterkorn, CEO since 2007, was hoping to have his stewardship of the company extended at a board meeting Friday. Earlier this month, Volkswagen said it planned to give Winterkorn a two-year contract extension which would keep him in charge through the end of 2018.

Other countries besides the United States said Tuesday they were looking into VW's actions:

— German Transport Minister Alexander Dobrindt said that he was setting up a commission of inquiry to determine whether the VW diesel vehicles were built and examined in compliance with German and European rules.

— The French government said it was beginning an in-depth investigation, to include demanding that domestic automakers "ensure that no such actions are taking place in France."

— In Brussels, European Commission spokeswoman Lucia Caudet said that "we need to get to the bottom of this" and that the European Union executive body is in close contact with Volkswagen and U.S. authorities "to establish the facts."