Acura has recalled two models because the emergency braking systems can malfunction. 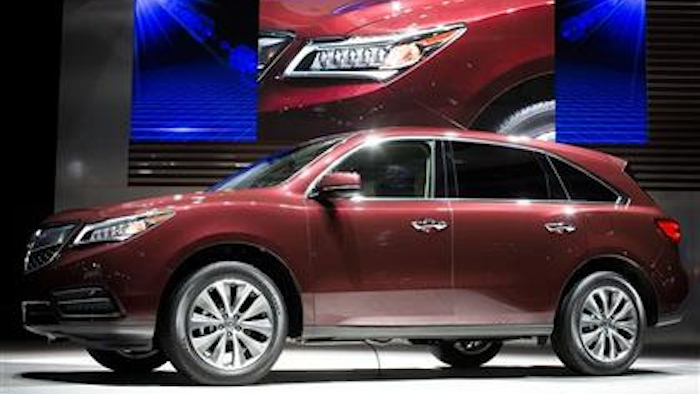 Acura has recalled two models because the automatic emergency braking systems can malfunction and put the vehicles at risk of a collision.

The recall involves just under 48,000 MDX SUVs and RLX sedans worldwide from the 2014 and 2015 model years and shows how even sophisticated safety technology can be prone to real-world glitches.

Acura's "Collision Mitigation Braking System" uses radar to scan conditions in front of the vehicles. If it determines the vehicle might hit an object, it automatically applies the brakes, slowing the vehicles to reduce damage and injuries.

In the recalled vehicles, the system can become confused and step on the brakes when it detects another vehicle accelerating in front while simultaneously driving along an iron fence or metal guardrail, according to Honda, the maker of Acura. The problem first surfaced in Japan in November of 2013 when an SUV braked for no reason and caused a rear-end collision. While Honda investigated, a second incident happened in June of last year.

Honda later duplicated the problem, figured out the cause and told safety regulators of the recall in May. The company says it has no reports of warranty claims, incidents or injuries in the U.S. because of the problem. Dealers will update the system software at no cost to owners.

Later versions of the system actually stop the vehicles before a crash, but those versions aren't affected by the recall.

Like any new technology, autonomous braking will develop problems in real-world driving that can't be found in testing by automakers, said Michelle Krebs, senior analyst for Autotrader.

When air bags were first introduced, for example, automakers found out that they inflated with too much pressure and injured smaller people, so they had to make adjustments, Krebs said. "Unfortunately some of these will only be discovered in real-world settings with real people behind the wheel," she said.

Despite the problems, air bags have saved thousands of lives, and autonomous braking likely will do the same, she said.

The Honda recall isn't the only problem to surface with autonomous braking systems. Last week the National Highway Traffic Safety Administration began investigating complaints that the systems on 2014 Jeep Grand Cherokees can brake for no reason.

The feature is an option on many high-end and even mainstream cars, and is standard equipment on only a few vehicles. Yet it's an important step in the march toward self-driving vehicles, and is being championed by safety advocates as a breakthrough in reducing crashes and highway deaths because it can react faster than humans.

The systems have so much promise that the National Transportation Safety Board is urging that automatic warning and braking systems be made standard on all new cars and commercial trucks.