The new four door called the Ghibli has Italian flair, a Ferrari engine and a lower price tag than Maserati's other models that are all priced above $100,000. 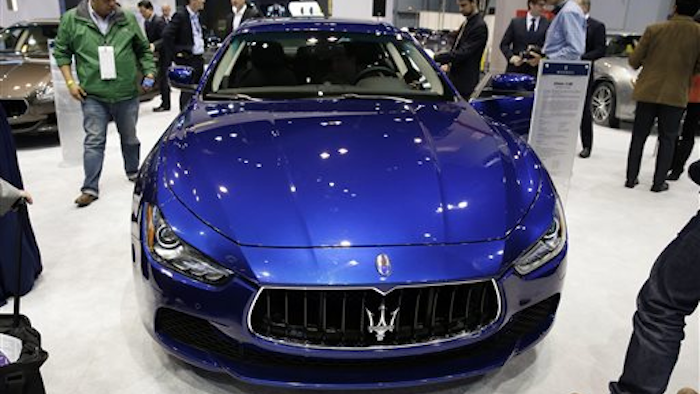 American roads are taking on a more Italian look these days.

First, Fiat SpA of Italy returned to the United States with its tiny Fiat 500 cars after buying into America's Chrysler Corp. in 2009.

Now, carmaker Fiat is boosting U.S. sales of its luxury Maserati brand by adding a new, lower-priced, mid-sized Maserati to its lineup.

The new four door called the Ghibli has Italian flair, a Ferrari engine and a lower price tag than Maserati's other models that are all priced above $100,000.

Starting manufacturer's suggested retail price, including destination charge, for a 2014 Ghibli is $67,850. This is some $35,000 less than the starting retail price for a 2014 Maserati Quattroporte sedan.

As an aside, singer Miley Cyrus has a Quattroporte. But her Maserati was stolen during a recent break-in at her Hollywood Hills home, according to police reports.

Intriguingly, the lower-priced Ghibli in upper level S Q4 trim comes with the same 404-horsepower, twin-turbo V-6 that's in the larger, base 2014 Quattroporte. This powerplant is capable of propelling the Ghibli from standstill to 60 miles per hour in just 4.7 seconds, according to Maserati. Other parts of the Ghibli also are from the Quattroporte, including much of the chassis and suspension.

So, car shoppers looking at the mid-size Porsche Panamera and Audi A7 luxury sports sedans have a new choice in their price range.

Specifically, the 2014 Panamera has a starting MSRP, including destination charge, of $79,095, while the 2014 Audi A7 has a starting retail price of $65,395. The Panamera, A7 and Ghibli all offer six-cylinder power and choice of rear- or all-wheel drive.

The Ghibli's arrival in the States isn't taking long to increase Maserati sales.

In fact, after this month, Maserati's cumulative 2014 car sales in the United States are likely to surpass its sales during all of calendar 2013.

Clearly, Ghibli buyers get a distinctive vehicle, not something ubiquitous like a BMW or Mercedes. Indeed, many casual observers did not recognize the Trident badge on the test Ghibli and did not know it was from Maserati.

And, because the tester was the uplevel Ghibli S Q4 with three portholes on each front fender, many observers could be easily fooled, unfortunately, into thinking it was a new Buick. Buick, after all, is more known in this country for portholes on their cars.

Some of this perception comes from the Ghibli styling, itself. It's attractive and muscular looking, especially when wheel wells are filled with uplevel, 20-inch, alloy wheels. The proportions of the car are spot on and from the side, the Ghibli has a coupe-like appearance and conveys motion and sportiness.

Still, the thin headlamps and hood design are not unique and the generic-looking taillamps don't differentiate the car.

The Ghibli interior has won praise from some auto critics but underwhelmed others because it doesn't exude a tech personality.

The tester's two-color dashboard — swathed in red above the instrument panel and glovebox but black atop the dashboard in the middle — looked great. Plus, this color combination, complete with red leather seats, set off the white exterior paint beautifully.

The front seats in the tester, by the way, were surprisingly comfortable for three-plus-hour trips, even if the firm ride can get tiring.

The Ghibli, even in uplevel S Q4 trim, doesn't have all the tech and features of competing luxury cars. For example, there is no blind spot monitor offered for the Ghibli.

And, the direction lines in the Ghibli's rearview camera were stationery and did not move as the steering wheel moved when the car was backing up. These lines do move in a Hyundai.

Technology that is in the Ghibli is presented well. The 8.4-inch display screen in the middle of the dashboard, for instance, is understandable in its controls and easy to operate. For anyone familiar with recent Chrysler vehicles, the screen also is similar to Chrysler's UConnect system.

The Ghibli S Q4 tester was responsive and an eager-to-please car for driving enthusiasts.

Power from the Ferrari-built, twin-turbo, direct injection, 3-liter V-6 came on with barely a turbo lag and is delivered so smoothly and strongly, a driver can run up fast on a car in front.

The maximum 406 foot-pounds of torque comes on by 1,750 rpm, and the eight-speed automatic transmission in the test car worked through the gears masterfully for quick performance.

Best of all, exhaust sounds were awesome — low, sinister and loud, especially when the driver depressed the Sport mode button.

Still, the V-6 did a good balancing act between power and fuel economy.

The car's average highway mileage was 20 miles per gallon, while city driving brought the average down to just under 18 mpg.

The federal government's average fuel economy rating for this all-wheel-drive model is 18 mpg, with a city/highway rating of 15/25 mpg.

Premium gasoline is required in the Ghibli, so filling the 21.1-gallon tank cost nearly $85 and was good for a travel range of 375 miles.

The Ghibli's 18 cubic feet of trunk space is good-sized for the class, and rear seatbacks fold down, if more room is needed.

In contrast to some other luxury, sport sedans that have sloping rooflines, the back seat of the Ghibli provides decent headroom of 38.8 inches. This compares with 36.6 inches in the Audi A7. Rear-seat legroom of some 33 inches in the Ghibli, however, can feel tight.