Government safety regulators say the economic and societal harm from motor vehicle crashes amounted to $871 billion in a single year. 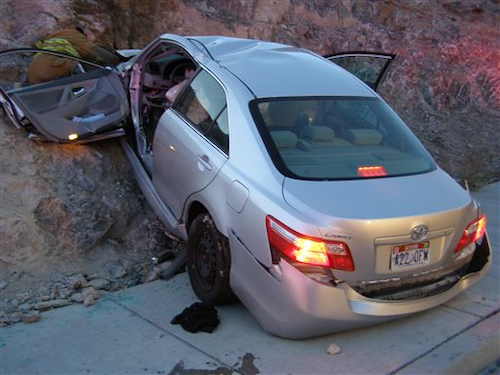 WASHINGTON (AP) -- The economic and societal harm from motor vehicle crashes amounted to a whopping $871 billion in a single year, according to a study released Thursday by the National Highway Traffic Safety Administration.

The study examined the economic toll of car and truck crashes in 2010, when 32,999 people were killed, 3.9 million injured and 24 million vehicles damaged. Those deaths and injuries were similar to other recent years.

Of the total price tag, $277 billion was attributed to economic costs — nearly $900 for every person living in the U.S. that year. Harm from loss of life, pain and decreased quality of life due to injuries was pegged at $594 billion.

The safety agency produces such calculations about once a decade.

The economic cost was the equivalent of nearly 2 percent of the U.S. gross domestic product in 2010. Factors contributing to the toll include productivity losses, property damage, and cost of medical and rehabilitation treatment, congestion, legal and court fees, emergency services and insurance administration and costs to employers. Overall, nearly three-quarters of these costs are paid through taxes, insurance premiums and congestion-related costs such as travel delay, excess fuel consumption and increased environmental impacts.

"While the economic and societal costs of crashes are staggering, today's report clearly demonstrates that investments in safety are worth every penny used to reduce frequency and severity of these tragic events," Transportation Secretary Anthony Foxx said in a statement.

The size of the impact detailed in the study may help Foxx make his case as he presses Congress to increase the amount the government can fine automakers for safety violations that lead to crashes like General Motors' delayed reporting of ignition-switch failures. Penalties currently are capped at $35 million. Foxx is urging that the lid be increased to $300 million, and some senators have endorsed eliminating the limit entirely. GM says 13 people have died in crashes linked to the problem, but the head of the safety agency, David Friedman, says it is likely the final death toll will be higher.

—Crashes involving a speeding vehicle accounted for $210 billion, or 24 percent.

—Preventable fatalities and injuries attributable to occupants who weren't wearing their seatbelts accounted for $72 billion, or 8 percent.