The first Camry was made at the plant in 1988, and the 10-millionth was also a Camry — at the celebration, the two vehicles were parked side-by-side. 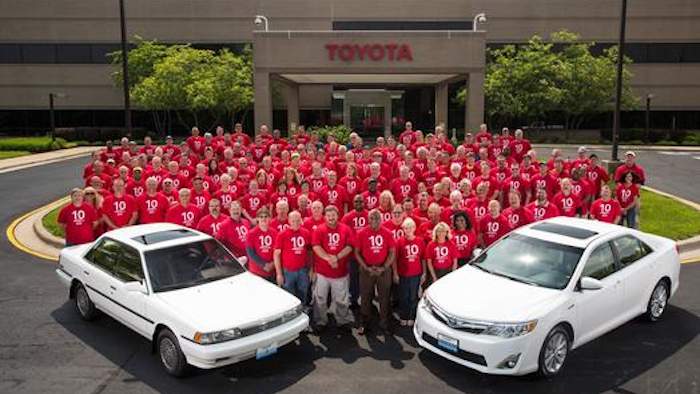 In a ceremony at the Toyota Motor Manufacturing Kentucky (TMMK) plant, located in Georgetown, Ky., the company and about 7,000 employees celebrated the 10-millionth vehicle to roll off the assembly line. The first Camry was made at the plant in 1988, and the 10-millionth was also a Camry — at the celebration, the two vehicles were parked side-by-side.

Plant president Wil James said, “Obviously, these two vehicles are worlds apart in many ways, but, at the same time, identical in others — particularly when it comes to craftsmanship and the care and love that went into their production.”

The 10-millionth Camry will be given to one of the TMMK employees via a blind drawing that will take place later this year.

And while today's event is meant to celebrate the successes at TMMK, it will also be bittersweet for some employees. In late April, the company announced that it would close its manufacturing headquarters in Erlanger, Ky., in order to consolidate management roles in Plano, Texas. While TMMK will continue its operations, about 1,600 positions are being moved out of northern Kentucky as part of the consolidation.

In addition to the Camry, which remains the nation’s best-selling car, Toyota Kentucky manufactures the Camry Hybrid, Avalon, Avalon Hybrid and Venza, in addition to both four-cylinder and V-6 engines. Officials at the plant have also said it will begin production of the first U.S. assembled Lexus ES350 in late 2015. That will boost its annual capacity by 50,000 to 500,000. Over the years, the company has invested $5.9 billion in the plant.

Kentucky Gov. Steve Beshear said, “I was lieutenant governor when Toyota came to Kentucky in 1986, and, over the years, it has been incredible to watch and assist in the growth that has taken place. This plant now has 7,000 team members, and we look forward to continued growth with 750 jobs being added when production starts for the first U.S.-assembled Lexus next year.”