Tennessee's incentive offer to Volkswagen was made contingent on the labor situation at the automaker's plant in Chattanooga developing to the "satisfaction" of Republican Gov. Bill Haslam's administration, according to documents. 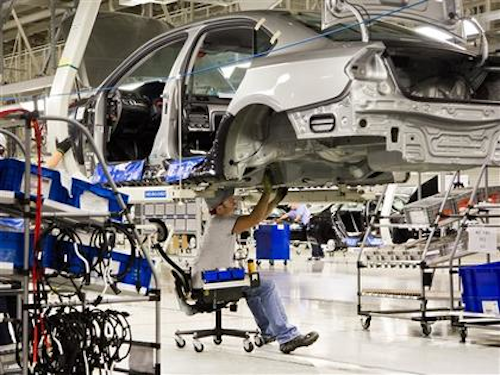 NASHVILLE, Tenn. (AP) -- Tennessee's incentive offer to Volkswagen was made contingent on the labor situation at the German automaker's plant in Chattanooga developing to the "satisfaction" of Republican Gov. Bill Haslam's administration, according to documents obtained by WTVF-TV in Nashville.

Haslam, who has been a vocal critic of the United Auto Workers' efforts to represent workers at Volkswagen's lone U.S. plant, has long denied suggestions that tax credits, grants and other incentives were tied to the union being rejected at the factory.

But an Aug. 23 summary of a nearly $300 million package, obtained by WTVF, carries a disclaimer toward the top of the page: "The incentives described below are subject to works council discussions between the State of Tennessee and VW being concluded to the satisfaction of the State of Tennessee."

Clint Brewer, a spokesman for the state Department of Economic and Community Development, told WTVF in an email that the incentive offer was based on "concerns we had at the time about process."

"In August 2013, it was unclear whether a works council was possible under U.S. law," he said. "The offer did not preclude the creation of a works council or union representation as a condition for the incentives."

Volkswagen wants to create a German-style works council at the plant representing both salaried and blue-collar workers. But to do so, it has said it must work with an independent union, so it called for a three-day vote on UAW representation in February.

The UAW lost that election 712-626 amid heavy opposition from anti-labor groups and GOP politicians, who warned that the Republican-controlled state Legislature was unlikely to approve incentives if the UAW won. It was also revealed in the days before the vote that the state's incentive offer had expired after 90 days, though top Haslam administration officials denied any link to the UAW vote.

Also, Republican U.S. Sen. Bob Corker, R-Tenn., repeatedly claimed that Volkswagen would announce an expansion at the plant within two weeks of the union being rejected, despite denials from VW management that the two issues were linked. No expansion has been announced in the weeks that have followed the vote.

The UAW is challenging the election to the National Labor Relations Board, which has scheduled a hearing in Chattanooga later this month on the basis that "politicians and outside special interest groups" had swayed the election.

The state's offer sheet, marked confidential, incudes $207 million in cash and cash equivalents and $93 million in tax credits for Volkswagen to add 960 production jobs and 240 contractor positions at the plant.

"It's obvious that the state was threatening or at least intimidating Volkswagen," he said. "To get the incentives, they had to change their business model."

Casteel said the documents should put "pressure on the state to do what they should have done in the first place — and that's give the incentives with no strings attached, just like they would any other company, union or non-union."