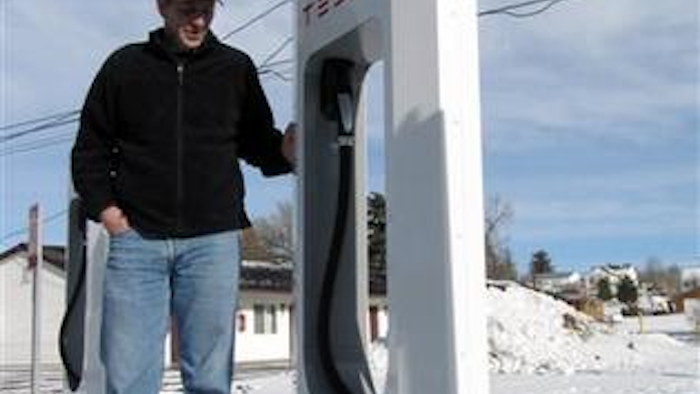 Finding a Tesla, the sleek and pricey all-electric car, around these ranching towns is about as likely as spotting the mythical jackalope. And yet, one day last month, a Model S sedan pulled quietly in at the America's Best Value Inn Covered Wagon Motel in Lusk, population 1,557.

Its mission was to plug in at four gleaming white Supercharger units the company had just installed in the motel's courtyard. The visit was part of a test of a planned coast-to-coast route of quick-charge stations for Tesla vehicles.

The Palo Alto, California-based company plans dozens more across the middle of the continent in the months ahead to make it more feasible for the electric car to go from seashore to seashore.

Some folks in Lusk are cautiously hoping that the stations will bring a steady stream of wealthy motor tourists. In the meantime, if and when the next Tesla shows up, locals who commonly plug in their cars and trucks to keep their engines from freezing may be left wondering about the visitors who plug in their cars to charge them.

After all, there's no shortage of skepticism about electric cars out here — it's not the kind of place for electric cars.

First, people are partial to the pickup truck because of its ability to tow heavy loads and endure the rattling rides of going off-road. Second, Wyoming is famous for its open ranges, terrain that has worried electric car owners because they could end up being stranded.

The Model S, which begins at $70,000 but with options can top $100,000, can drive a long way for an electric car: Up to 265 miles (426 kilometers) on a single charge. Draining the battery pack and recharging it all the way takes more than four hours with the best available home charger.

The company's Superchargers — Wyoming's first are at the Covered Wagon — offer a trade-off that makes long-distance trips more feasible. The stations can charge a run-down Tesla battery pack to 90 percent in just 45-50 minutes.

In Lusk, that's enough time to grab a burger at the nearby Outpost Cafe or Triangle 4 Cafe & Steakhouse, or visit the antiques stores downtown.

The Supercharger station will be a critical stepping-stone between stations in Cheyenne and Rapid City, South Dakota. Highlights on the first coast-to-coast route — to be followed, Tesla says, by a couple more cross-country options by the end of this year — include the scenic Four Corners region and Mount Rushmore.

The last time Lusk got any attention for such cutting-edge technology was in the late 1990s, when a Microsoft television ad trumpeted the town's connection to the Internet as an answer to tough times for the ranching community. In reality, a $3 million project to link Lusk to fiber-optic broadband was stalled for years.

For a time, high-speed Internet was as elusive as the jackalope, a creature based on a trick of taxidermy in which antelope horns are placed on a jackrabbit. Residents can now surf the Web pretty much like anybody else, but it's an open question whether any locals will buy a Tesla, or any other electric car.

Niobrara County, population 2,456, is home to plenty of wealthy ranchers who can afford a Tesla, said Michael Mercer between oil changes at a downtown auto repair shop. The problem is that most live in country far too rugged for low-clearance vehicles.

"They're not going to take some hundred-something-thousand-dollar car off road," he scoffed.

Inga Miller, a bartender and store clerk at the Lusk Liquor & Lounge, said her dream truck is a Ford F-150 extended cab with four-wheel drive, a great stereo system and a bed big enough to haul plenty of hay for her friends' horses.

"I'm a pickup girl. If they come out with one that's an electric pickup, it might be all right," Miller said.

The jury agreed that the employee was subjected to racial harassment and a hostile work environment.
Oct 5th, 2021
Follow Us
Most Recent