Taking the stage before an adoring crowd, Tesla Motors CEO Elon Musk played both catch up and leap frog. At an open-to-the-public unveiling Thursday night that included bumping music, free alcohol, and test rides on an airport tarmac, Musk unveiled a new version of... 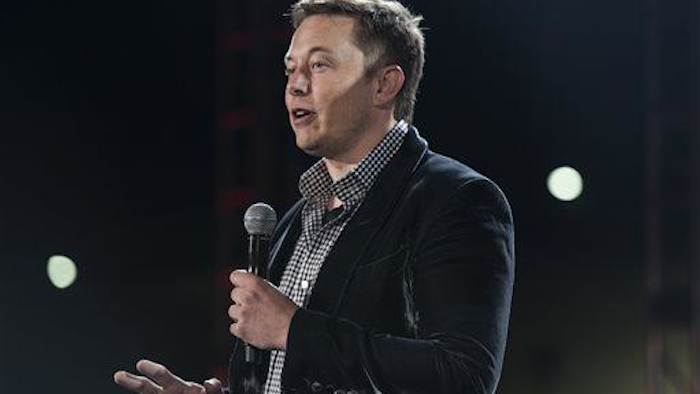 Taking the stage before an adoring crowd, Tesla Motors CEO Elon Musk played both catch up and leap frog.

With more than 1,000 Tesla fans in the audience, Musk explained that while the current Model S is a rear-wheel-drive car with one motor, a new version will have two motors — one powering the front wheels and one powering the rear wheels.

All-wheel drive helps grip slippery roads and is standard on many luxury sedans. Analysts have said Tesla needed it to boost sales in the Northeast and Midwest, as well as Europe. The company sold 13,850 cars in the U.S. this year through September, down 3 percent from a year ago, according to Autodata Corp.

Musk said unlike all-wheel-drive systems on gas-powered cars, Tesla's system improves the speed, acceleration and mileage by optimizing which motor is used. The dual motor version of the P85 performance sedan will have a top speed of 155 mph, compared with the current 130 mph. It will accelerate from 0-60 mph in 3.2 seconds, akin to exotic sports cars.

"This car is nuts. It's like taking off from a carrier deck," Musk said at a municipal airport near Los Angeles where another of Musk's companies — the commercial rocket firm SpaceX — is based. The crowd obliged with cheers and applause.

Tesla is also significantly upgrading its safety features through a combination of radar, image-recognition cameras and sonar.

The Model S will steer itself back if it wanders from its lane and brake automatically if it is about to hit something. Those features are offered on luxury competitors, as well as mainstream brands such as Ford, Hyundai and Toyota.

But Tesla is going a step further. Its new system will move the car over a lane when the driver uses the turn signal. It will also use cameras to read speed limit signs and decelerate accordingly. Volvo has a system that reads signs and alert drivers if they are over the limit, but does not change the speed.

Musk said "auto pilot" does not mean that the car could drive itself — as he put it, a driver cannot "safely fall asleep." Although, he said, on private property — not public roads — a driver could summon the car remotely.

While the addition of all-wheel drive catches Tesla up with other in the luxury car market, pulling together all the driver-assist features impressed Brian A. Johnson, an analyst with Barclay's. "It's a year ahead of the timeframe I was expecting," he said.

Raj Rajkumar, a pioneer of self-driving cars with Carnegie Mellon University, was similarly impressed but wondered about the limitations of "auto-pilot" — how would it perform in different weather and road conditions.

The dual motor will be a $4,000 option on the base and mid-range Model S, which start at $71,000. The base price for the P85 with all-wheel drive — which will be known as P85D — is $120,000. The cars went on sale immediately on Tesla's website; the P85D will be delivered beginning in December, while the other versions begin delivery in February.

The governors of other New England states — New Hampshire, Maine and Vermont — had expressed skepticism about the program.
Nov 19th, 2021
Follow Us
Most Recent