Electric carmaker Tesla Motors was expected to unveil an all-wheel-drive system — and perhaps more — at a much-hyped mystery event Thursday night near Los Angeles.Tesla didn't confirm what it would show ahead of the event. The only hint came... 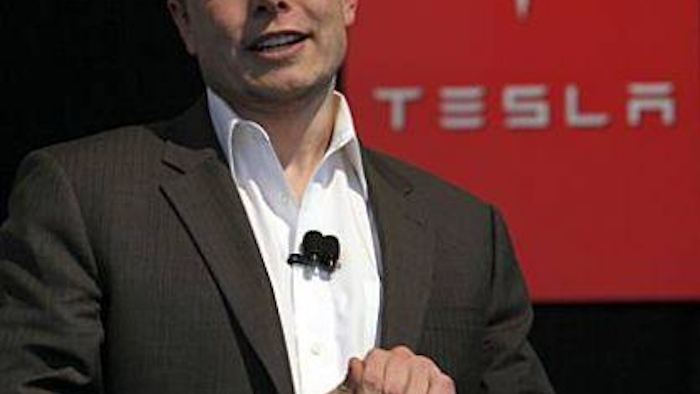 Tesla didn't confirm what it would show ahead of the event. The only hint came last week, when CEO Elon Musk tweeted, "About time to unveil the D and something else," with a photo showing what looked like Tesla's Model S sedan mostly hidden by a garage.

The tweet prompted a swirl of speculation reminiscent of the launch of a high-demand, mass-market gadget — not something from a car company that sells just 35,000 luxury cars per year.

Tesla's shares to jumped 4 percent the day after the tweet. They were up 1 percent to $262.59 ahead of Thursday's announcement.

Musk planned to deliver the answer at the municipal airport in Hawthorne where another of his companies — the commercial rocket firm SpaceX — is headquartered. Tesla also has a design studio at the facility.

Analysts who track the company say the "D'' is likely a reference to a "dual motor," all-wheel-drive system. Tesla's only current vehicle, the Model S sedan, is rear-wheel drive, with one motor controlling the wheels. That has hurt sales in the snowy Northeast and Midwest as well as in Europe. Indeed, Tesla sales could use a boost — the company sold 13,850 cars in the U.S. through September, down 3 percent from a year ago.

"If Tesla wants to be seen a true competitor to brands like Audi, BMW, Jaguar and Mercedes-Benz, it needs to offer all-wheel drive," said Karl Brauer, a senior analyst at Kelley Blue Book.

Tesla has promised that its new Model X crossover, which is expected to go on sale next year, will have an all-wheel-drive system. The company recently upgraded its factory in the San Francisco Bay Area to produce the Model X, so it makes sense that the system could go onto the Model S, which is produced at the same facility.

As for the "something else," speculation swirls.

"I'm reading the tea leaves like anybody else," said Andrea James, an applied technologies analyst with Minneapolis-based Dougherty & Co.

She's heard all sorts of theories, including that the "D'' could stand for "drop top." She doubts that a convertible is in the offing. After all, winter is approaching.

Instead, James suspects the "D'' relates to "driver assist." Tesla has updated its software in a way that foreshadowed features such as hands-free highway merging, James noted. And its competitors have been rapidly adding features to allow for semi-autonomous driving. Cadillac said last month that it will sell a car that can drive semi-autonomously on freeways by 2016.

Thursday's event was similar to the 2012 introduction of the Model X in Hawthorne, before a crowd of enthusiastic devotees.

Gov. Jerry Brown attended that event, but he isn't likely to show up Thursday. Tesla recently selected Nevada over California for its new $5 billion battery factory despite Brown's lobbying.