Goodyear decommissioned the last of its 45-year-old blimps in March and replaced them with new models that require fresh training. 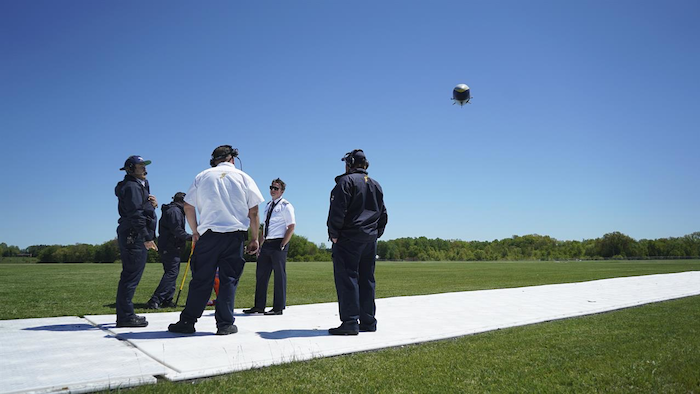 In this Monday, May 15, 2017, photo, an airship crew watches as a Goodyear airship prepares to land in Akron, Ohio. Goodyear airship pilots are getting retrained to fly new models after Goodyear deflated the last of its 45-year-old iconic blimps in March. (AP Photo/Dake Kang)

When William Bayliss is in the air, he wants to make sure he's the one flying the machine, not the machine flying him. That's why blimps are more his speed than planes.

Bayliss, one of about only 40 airship pilots in the world, flies for the Akron-based Goodyear Tire & Rubber Co. It's one of the most difficult jobs in aviation, a position so rare and out of fashion that there are more astronauts in the world. In this realm, there is no autopilot like on traditional planes.

"They fly all by themselves," said Bayliss, a cherub-cheeked, sandy-haired 31-year-old. "As a pilot, you want to fly. You don't want to watch a computer fly."

Goodyear decommissioned the last of its 45-year-old blimps in March and replaced them with new models that require fresh training. Each pilot must fly 100 hours before he or she is ready to go solo. Six have finished, but seven others, including Bayliss, are in the middle of training. 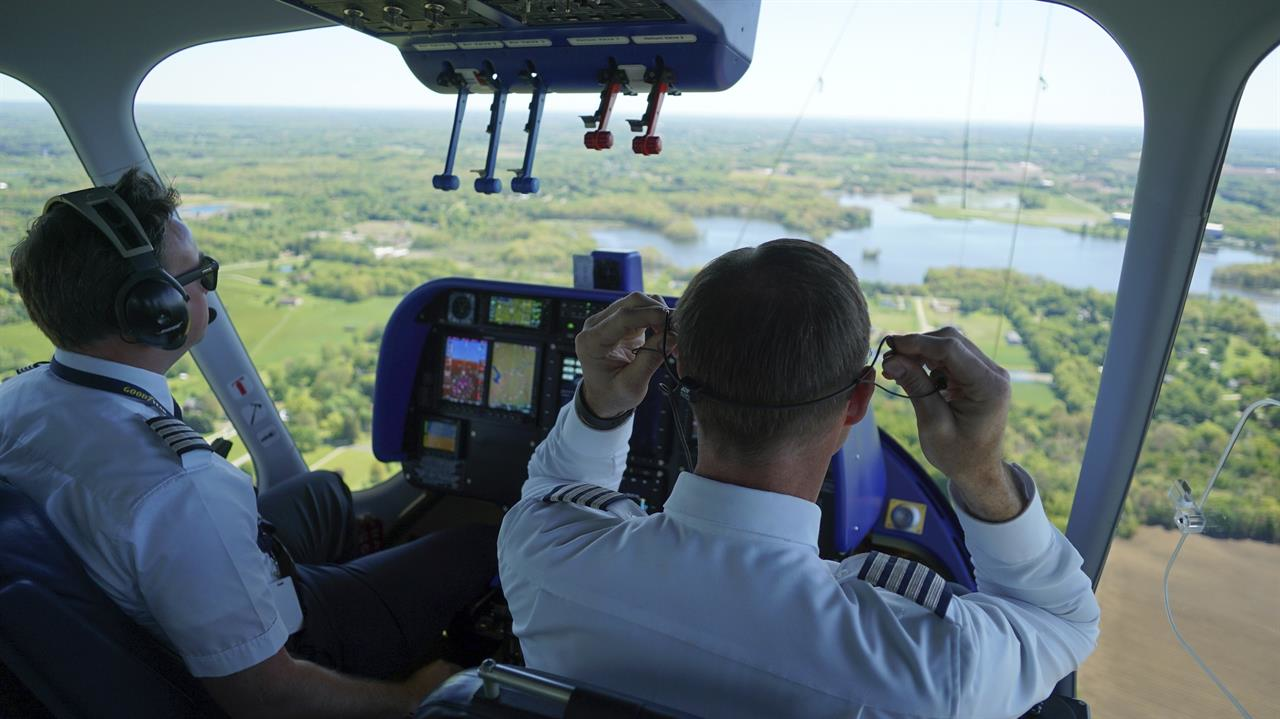 In this Monday, May 15, 2017, photo, Michael Doughtery, right, chief Goodyear pilot, lifts his earpiece off during an airship training flight for William Bayliss, left, over Akron, Ohio. The Goodyear Tire company is training pilots of its iconic blimps to fly new airships in northeast Ohio. Goodyear retired the last of its old blimp fleet in March. (AP Photo/Dake Kang)

The shape of the old blimps was maintained by gas pressure. The new models are technically zeppelins, not blimps, because they have a frame structure that maintains the ship's shape. That makes them easier to maneuver, Goodyear says, acknowledging the company will still call them blimps.

On a sunny Monday morning at a grassy field near the Goodyear hangar, Bayliss clambered into the cockpit for a flight with Michael Dougherty, chief pilot in charge of training. As they geared up for liftoff, Bayliss pulled out a checklist and peered up and down the controls, left and right around the interior.

Though the Hindenburg disaster helped end the airship era 80 years ago, Goodyear kept its fleet to advertise its tires over baseball games and golf championships. The ships drift lazily over sporting events, allowing on-board cameras to stream aerial footage live to TV networks.

Airships are tricky to fly because they're light, yet bulky, making them susceptible to battering by wind and rain. Water collects on the nearly 30,000 square feet of fabric making up the ship's envelope, foisting it with extra weight.

"It's really like flying a boat," Dougherty said. "It's a learning curve."

Even the temperature makes a big difference. Hot days mean the helium will expand, giving a ship more lift; cold days make it contract, bogging it down. 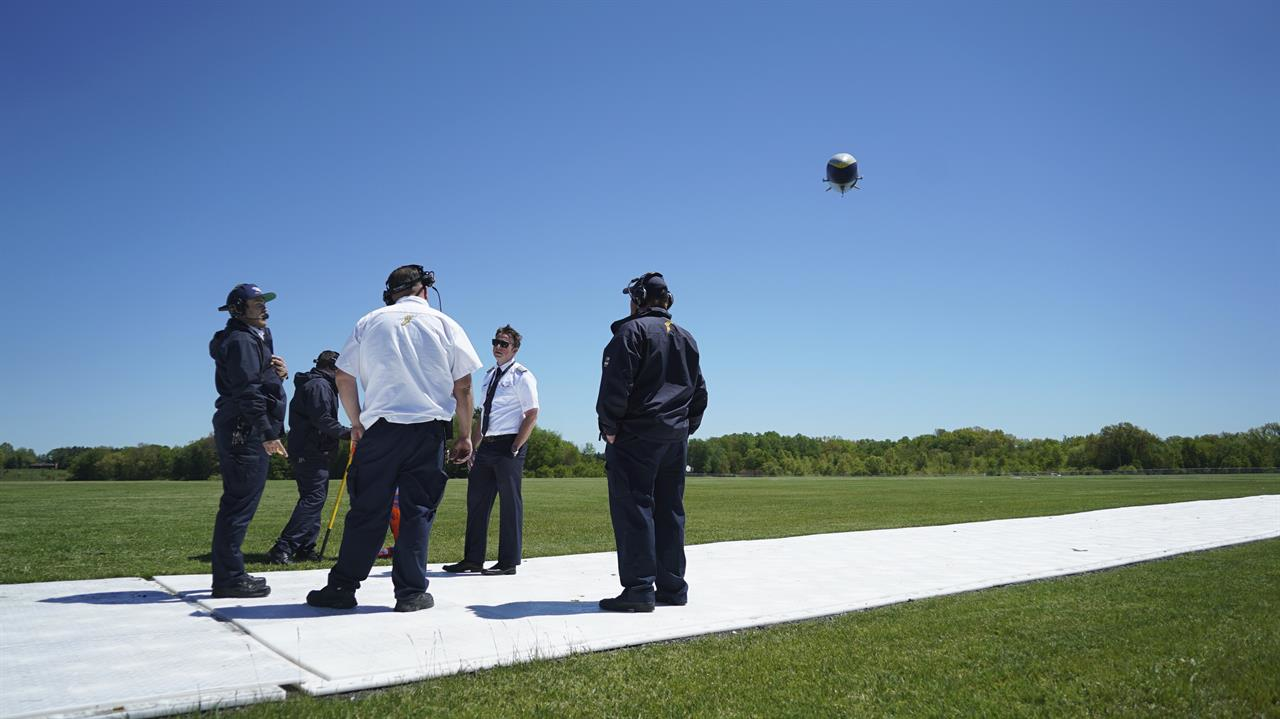 In this Monday, May 15, 2017, photo, an airship crew watches as a Goodyear airship prepares to land in Akron, Ohio. Goodyear airship pilots are getting retrained to fly new models after Goodyear deflated the last of its 45-year-old iconic blimps in March. (AP Photo/Dake Kang)

Because weather changes all the time, it's impossible to create blimp flight simulators, making the extra training hours necessary.

"No two takeoffs and two landings are ever the same," Dougherty said. "There so many variables; you're at the mercy of the environment around you."

But it's the difficulty of piloting an airship that draws people in the first place. They are the last chance for pilots to take to the skies the old-school way: no autopilot, no computer algorithms crunching data, only a human at the throttle.

That's what led Bayliss to apply for a job at the Goodyear Tire & Rubber Co. Bayliss was set on being an airline pilot until the day he first tried a simulator in flight school, when an uncomfortable revelation sank in: Most of the time, it wouldn't be his hands on the throttle.

"I thought to myself, 'Ah, I bet they don't have autopilot on airships,'" Bayliss said. "That's how it all started."

Flying airplanes these days is a strict routine. Every takeoff and landing has to be done at the same speeds, at the same angles, with the same engine power, all controlled by autopilot. Pilots call it "flying by numbers" and bemoan it for turning them into passive dial monitors.

Bayliss found a refuge in the cockpit of Goodyear's blimps. When he heard they would be replaced with the new models, he worried flying them wouldn't be the same.

The old blimps had rubber pedals, elevator wheels and steam gauges. They felt tactile in a way the new airships, with GPS, joysticks and glass cockpit screens, don't, Bayliss said.

But gripping the throttle of Goodyear's new airship, he said he felt the same thrill he'd looked for his whole life.

"You can't just fly numbers, you feel it," Bayliss said. "Pilots, we call it 'seat of the pants' flying."