Japan Exports Slip Despite Uptick in Trade With China

Thought prospects for 2021 have improved. 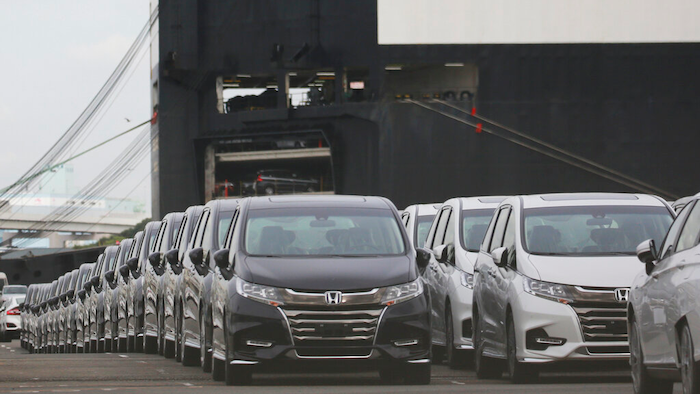 Cars wait to be exported at Yokohama port, near Tokyo.
Associated Press

TOKYO (AP) — Japan's exports fell more than 4% from a year earlier in November, the 24th straight month of declines, despite an uptick in trade with China, according to customs data released Wednesday.

Exports of vehicles, semiconductors and other manufactured items showed the biggest drops in terms of value.

Imports fell by a larger margin of 11%, led by plunges in purchases of food, oil, coal and gas. That left a global trade surplus of 366.77 billion yen ($3.5 billion). Both imports and exports were weaker than forecast.

China is Japan's largest export market and its recovery from the shocks of the coronavirus pandemic has helped it and other economies that are still struggling with a resurgence of outbreaks. The recovery in demand helped net trade boost Japan's economic growth in the July-September quarter by nearly 3%.

It may also boost growth in this quarter, though a rebound in imports is also likely, Tom Learmouth of Capital Economics said in a report.

But he said that due to weakness in services exports, overall exports are not likely to return to pre-virus levels until the middle of next year.

The long-term decline in exports reflects a variety of factors, including aggressive expansion of overseas production by Japanese manufacturers and investments in advanced technologies in China, Vietnam and other major markets. But the prolonged contraction has been decidedly worsened by the pandemic, as exports fell by nearly 30% from a year earlier in May and June.

In terms of volumes, both exports and imports rose. But lower prices caused them to fall in terms of value. That was especially true for energy prices given the steep decline in the price of crude oil and some other commodities as demand has weakened during the pandemic.

Despite weakness in trade, Japan's economy has been on the mend after a recession that began even before the coronavirus crisis struck in the spring.

“We maintain a cautious near-term outlook as a renewed wave of COVID infections and lockdowns abroad will weigh on overseas demand, although stronger momentum in China should provide some support," Stefan Angrick of Oxford Economics said in a report.

He noted that “prospects for 2021 have improved as the rollout of a COVID vaccine should allow for a more robust global recovery."