At issue are five labor attaches the United States intends to send to Mexico to oversee the Mexican government’s labor reforms. 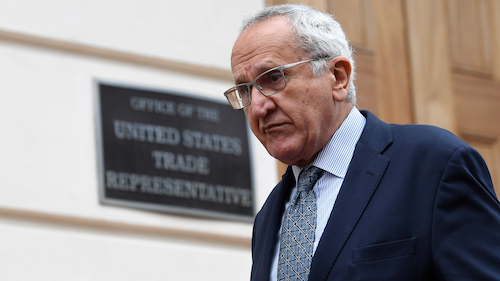 At issue are five labor attaches the United States intends to send to Mexico to oversee the Mexican government’s labor reforms. Those plans were revealed Friday when the U.S. published the implementing legislation for the U.S.-Mexico-Canada Agreement — the legal text of the pact that the U.S. Congress will vote on.

Over the weekend, Mexico’s top trade negotiator, Jesús Seade, complained that Mexico had been blindsided by the provision on the attaches.

All along, Mexican negotiators have rejected the idea that American officials could roam the country, inspecting factories to make sure Mexico was living up to commitments to let workers organize unions and bargain for higher wages and better working conditions.

Seade took to Twitter declare: “Mexico will NEVER accept them if it is in any way about disguised inspectors, for one simple reason: Mexican law prohibits it.”

It was unclear what Mexico could actually do about the attaches: Its Senate had already ratified the trade agreement. Seade said the U.S. attaches were not mentioned in the pact the Mexicans had agreed to.

On Monday, U.S. Trade Representative Robert Lighthizer wrote a letter reassuring Seade that “these personnel will not be ‘labor inspectors’ and will abide by all relevant Mexican laws.’’

“My suspicion is that these attaches will take a big-picture view and focus on egregious situations and point those out and give notice to the Mexican government,’’ said Miguel Noyola, a partner at Baker & McKenzie LLP, who specializes in business in Mexico and Latin America. “I don’t think they will just be going on fishing expeditions.’’

And Seade, after meeting with Lighthizer in Washington Monday, told reporters: “I am satisfied. And I called the authorities in Mexico, and they are satisfied.”

Earlier, Mexican Foreign Minister Marcelo Ebrard minimized the dispute saying that the pact remained ïntact’’ and Mexico did not feel tricked by the provision on the attaches.

The USMCA replaces the 25-year-old North American Free Trade Agreement, which tore down most trade barriers between the United States, Canada and Mexico. NAFTA triggered a surge in trade between the three countries. But Trump and other critics said it cost the United States jobs by encouraging factories to move south of the border to take advantage of low-wage Mexican laborers, who were largely prevented from forming independent unions.

Trump demanded a rewrite and strong-armed Mexico and Canada into going along and signing USMCA. But the revamped regional trade deal needs to be approved by the U.S. Congress, and Democrats in the House demanded — and got — beefed-up language meant to ensure that Mexico goes through with promised labor reforms, including those designed to encourage independent unions.

Daniel Ujczo, chair of the international practice at Dickinson Wright PLLC in Columbus, Ohio, said there was “some theater in all of this as a result of the Democrats taking victory laps last week. It is making it difficult for Mexico to save face in light of some significant, yet necessary, concessions to get the deal done.’’ It was, he said, “necessary for Mexico to show some pushback.’’

Tyson has 36 poultry plants in the US, and reportedly expects to start taking orders from China early next year.
Mike Hockett
Dec 17th, 2019

President Donald Trump delivered another setback to the optimists Tuesday, saying he was willing to wait until after the 2020 elections to close a deal with Beijing.
Paul Wiseman
Dec 3rd, 2019

Trump Says China Deal Could Wait until after Election

Trump said Tuesday that the only limiting factor to reaching an agreement with China is whether he wants to make a deal.
Zeke Miller
Dec 3rd, 2019