Japan and the European Union were rushing Friday to finalize an agreement on easing barriers between their huge economies, hoping to have the gist of a deal before the Group of 20 industrial nations meets next week in Germany. 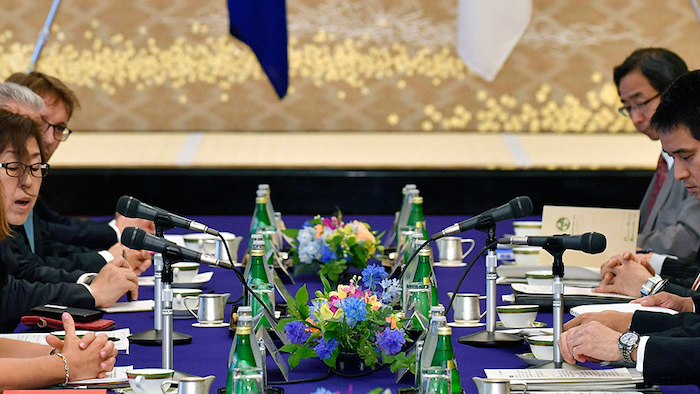 TOKYO (AP) — Japan and the European Union were rushing Friday to finalize an agreement on easing barriers between their huge economies, hoping to have the gist of a deal before the Group of 20 industrial nations meets next week in Germany.

"We are making our utmost efforts," Japanese Foreign Minister Fumio Kishida said. "We need to take into consideration respective sensitivities and make utmost efforts from the perspective of national interests."

He told reporters he expected the talks to be both "fierce and tough."

Local reports said one main point of disagreement was Japan's up to 40 percent tariffs on imported cheese.

Together, the 28-nation EU and Japan form a market of nearly 640 million people and account for nearly a third of global economic activity. Japan is the EU's No. 2 trading partner after China.

After Trump withdrew the U.S. from a Pacific Rim trade pact that had been championed by President Barack Obama, Japan and other Asian-Pacific countries involved have continued talks on a revised version of that initiative, called the Trans-Pacific Partnership.

The work on a Japan-EU trade agreement has taken over a decade.

Both Japan and the EU have a tradition of protecting their politically powerful farm sectors. Dairy products are an especially sensitive issue for both the EU, with its long traditions and half the world's market share for cheese, and for Japan, where farmers are struggling to compete.

Japan has sought to limit its concessions on dairy imports in the EU talks to the 29.8 percent level for mozzarella, Gouda and Camembert agreed to during its TPP negotiations, Japanese media reports said. The tariff on processed cheese is 40 percent.

"We will resolutely protect our interests. There is no cause for concern," Yuji Yamamoto, Japan's minister of farming, forestry and fisheries told reporters in Tokyo.

Japan is keen to see the EU reduce its tariffs on vehicles, electrical machinery and other industrial products.

Both sides also are targeting each other's "non-tariff measures," such as onerous regulations that deter exporters from even trying to sell in a market.