The U.S. economy grew at a slightly faster rate in the fourth quarter than earlier estimates, as consumers powered economic momentum heading into 2017. 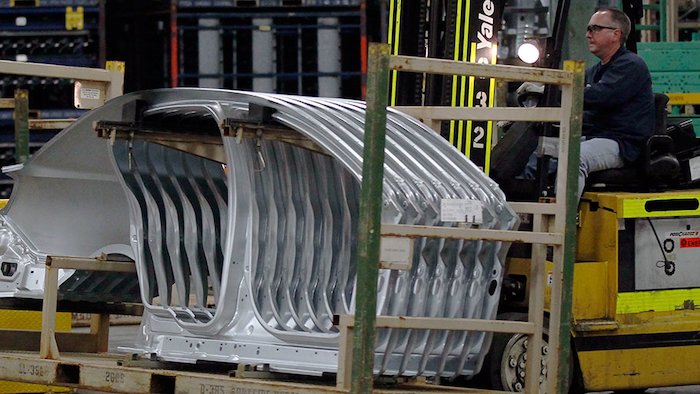 WASHINGTON (AP) — The U.S. economy grew at a slightly faster rate in the fourth quarter than earlier estimates, as consumers powered economic momentum heading into 2017.

The gross domestic product, the economy's total output of goods and services, expanded at an annual rate of 2.1 percent in the October-December period, the Commerce Department reported Thursday. That is an improvement from the previous estimate of 1.9 percent. The added strength stemmed from stronger consumer spending, which offset an increased drag from trade.

The small change to the fourth quarter did not alter growth for the entire year, which came in at an anemic 1.6 percent. It was the worst showing in five years. President Donald Trump has pledged to boost GDP growth to 4 percent or better, though private economists are doubtful.

For the fourth quarter, the government revised its estimate for consumer spending, which accounts for two-thirds of economic activity, to a growth rate of 3.5 percent from a previous estimate of 3 percent.

The economy also got a boost from slightly stronger rebuilding of business stockpiles. However, these increases were offset somewhat by a bigger trade deficit, which subtracts from GDP growth, and less business investment.

The 2.1 percent GDP growth in the fourth quarter came after a 3.5 percent spurt of growth in the third quarter. For the current quarter, analysts believe growth will come in around 2 percent

Since the Great Recession ended in mid-2009, annual growth has averaged 2.1 percent, the worst performance for any recovery in the post-World War II period.

Trump vowed during the campaign to double economic growth to 4 percent or better. He said his economic program of tax cuts, deregulation and increased spending in such areas as the military and infrastructure would boost the economy back to growth rates not seen on a sustained basis in decades.

However, Trump's legislative agenda received a setback last week when Republicans were forced to pull a measure to repeal and replace the Affordable Care Act because they did not have enough votes in the House of Representatives. Despite the setback, Trump has said the administration will soon unveil a plan to cut individual and corporate tax rates, a key component of his stimulus program.

Treasury Secretary Steven Mnuchin said last week that even if the initial goal of getting the tax measure approved by August slips, he still believes the plan can win congressional approval by this fall.

Mnuchin has cited a lower goal of growth above 3 percent. Private economists, however, believe the impact of Trump's stimulus efforts will be even smaller. Top forecasters with the National Association for Business Economists on Monday projected GDP growth this year of 2.3 percent, rising only slightly to 2.5 percent in 2018.

Private economists believe that even with the full adoption of Trump's stimulus program, the economy will be facing stiff headwinds such as an aging workforce as the baby boomers retire and disappointing gains in productivity. Growth in the labor force and productivity growth are the two key components that determine potential GDP growth.

Another complicating factor for Trump's program is the Federal Reserve, which earlier this month boosted a key interest rate for the second time in three months and retained a projection for a total of three rate hikes this year. The Fed is raising interest rates to make sure that inflation does not become a problem but higher rates could make it harder to achieve faster GDP growth.