U.S. businesses increased their orders in January, although a key component that tracks business investment spending fell for the first time in four months. 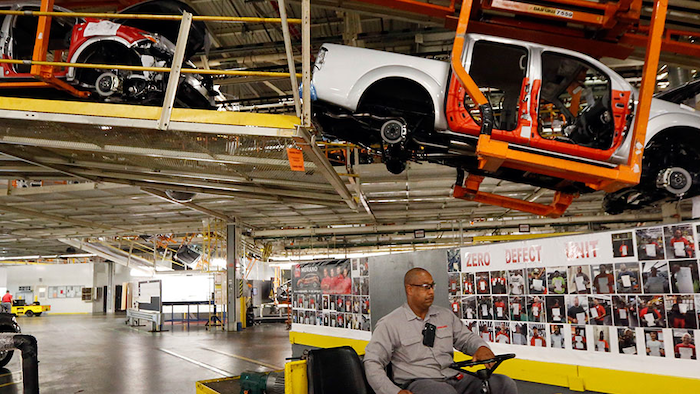 WASHINGTON (AP) — U.S. businesses increased their orders in January, although a key component that tracks business investment spending fell for the first time in four months.

Factory orders rose 1.2 percent, led by a jump in demand for aircraft, the Commerce Department reported Monday. Orders had risen 1.3 percent in December.

A category that serves as a proxy for business investment edged down 0.1 percent in January after three months of solid gains. It was the first setback since a 1.5 percent decline in the category in September.

American manufacturing has been under stress for nearly two years as a strong dollar cut into export sales and a big plunge in oil prices triggered cutbacks by energy companies. Manufacturers are expected to see stronger sales in 2017.

Demand for durable goods, items ranging from bicycles to battleships that are expected to last at least three years, rose 2 percent. That was even better than the initial estimate of a 1.8 percent gain made in an advance report on Feb. 27. Demand for nondurable goods, everything from paper products to chemicals and food, rose 0.4 percent in January after a 3.4 percent jump in December.

The strength in January reflected a surge in orders for commercial aircraft, which jumped 69.8 percent, and a 62.2 0ercent rise in orders for military aircraft. Demand for motor vehicles and parts rose 0.8 percent, while orders for ships and boats fell 33.7 percent.

Manufacturing firms have struggled since 2015 with a rising value of the dollar, which makes exports more expensive in foreign markets, and a plunge in oil prices which triggered big reductions in investment by U.S. energy companies.

But economists are hopeful that energy investment will begin rising now that oil prices are rebounding, and they believe export demand should also improve now that the dollar has stabilized.