A business economics group has boosted its outlook for U.S. economic improvement this year and next, particularly for job growth. 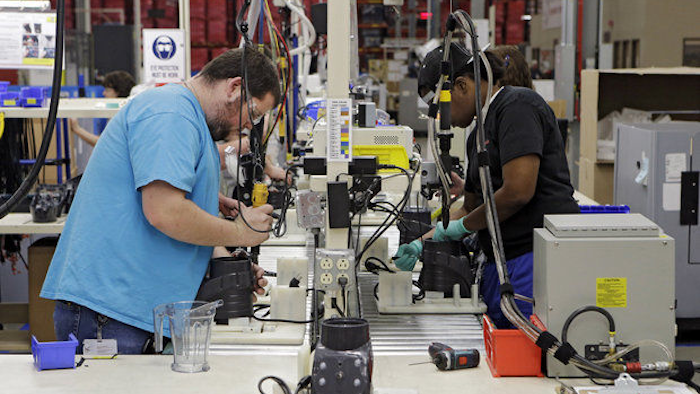 Washington, D.C. — A business economics group has boosted its outlook for U.S. economic improvement this year and next, particularly for job growth.

The March report from the National Association for Business Economics forecasts more hiring, a lower unemployment rate, a lower inflation rate and more growth in consumer spending in 2015, compared to the group's forecast December 2014.

The report, released early Monday, also predicts more investment by businesses in both equipment and intellectual property, as well as modest growth in stock prices.

Other factors driving the improved forecast include an increased pace of activity in the housing sector, the strong dollar and continued low oil prices.

The NABE report did contain some negatives, however. Those include a widening U.S. trade deficit in 2015, a 0.1 percent dip in 2015 hourly compensation growth from December's prediction to 2.5 percent, and scaled-back forecasts for 2015 corporate profit growth, down 2 percentage points to 4.7 percent from December's forecast.

Meanwhile, 88 percent of the panel of 50 professional forecasters predicted the Federal Reserve will start increasing interest rates in the second or third quarter of this year.

Highlights of the association's forecast include:

—Gross domestic product is expected to grow 3.1 percent in 2015, unchanged from the December forecast.

—Inflation, as measured by the consumer price index, is expected to decline 0.6 percent in 2015, a big improvement over December's forecast that it would increase by 1.7 percent.

"The improved consumer spending outlook may be attributable to the psychological impact of lower gasoline prices, as well as improving employment and income growth," the report noted.