The decision comes about a month after federal inspectors downgraded the plant's safety rating to the lowest level and said they would increase oversight in the wake of a shutdown during a winter storm. 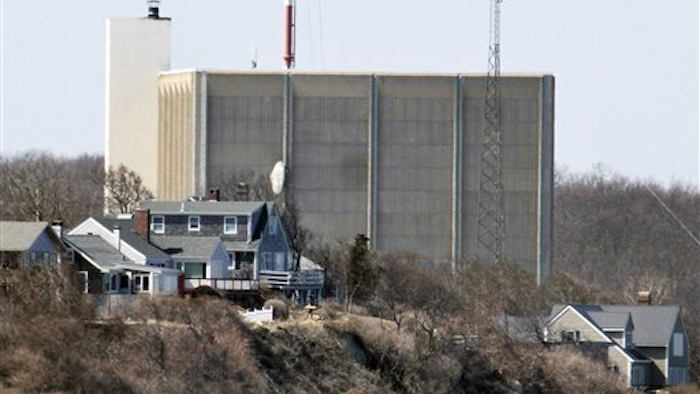 BOSTON (AP) — The owners of the beleaguered Pilgrim Nuclear Power Station in Plymouth announced Tuesday that they will close the plant by June 2019 because it's becoming too expensive to run.

The decision by New Orleans-based Entergy Corp. comes about a month after federal inspectors downgraded the plant's safety rating to the lowest level and said they would increase oversight in the wake of a shutdown during a winter storm. Owners maintained that the plant remained safe although it needed millions of dollars in upgrades.

"The real issue here is the financial viability of the plant," said Bill Mohl, president of Entergy Wholesale Commodities.

The decision to close the plant was a "decision of last resort," Mohl said.

The 680-megawatt plant, which went online in 1972, was relicensed in 2012 for an additional 20 years and is the only nuclear power plant in Massachusetts. It employs about 600 people.

The timing of the shutdown depends on several factors, including further discussion with ISO-New England, the operator of the region's power grid, Entergy said.

Management cited several reasons for the decision, including low current and forecast low wholesale energy prices that are expected to lead to annual losses of more than $40 million in revenue for Pilgrim.

"When we look at energy policies in Massachusetts we see a proposed clean energy standard that excludesnuclear, a preference for Canadian hydro power and the subsidization of gas pipeline capacity through electric ratepayers, and put that all together ... and it became clear to us that we needed to make the decision to retire Pilgrim," Mohl said.

The plant will remain under enhanced oversight by the federal Nuclear Regulatory Commission throughout the process, and Entergy expects to spend $45 million to $60 million at the plant during that time, he said.

After shutting down, Pilgrim will transition to decommissioning. The Pilgrim nuclear decommissioning trust had a balance of about $870 million as of Sept. 30, Entergy said.

Entergy's decision was met with mixed reaction from groups that have been fighting for decades to have the plant shut down and fiercely fought relicensing.

The state will continue to live in the shadow of a plant that many people consider dangerous, said Arlene Williamson of Cape Downwinders.

"Entergy doesn't have the financial ability to get Pilgrim out of the dog house, but it will continue to operate for four more years with many safety violations and mechanical failures," she said.

But Mohl said the plant's neighbors have no reason worry. He said cutting safety corners "is not an option and not the way we do business."

"We are absolutely committed to safety," he said.

Craig Pinkham, acting president of Utility Workers Union of America Local 369, which represents many Pilgrim workers, called on Entergy and the NRC to work together to keep the plant open. The plant, he said, provides 17 percent of the electrical power to Massachusetts.

The spent nuclear fuel at the site will be safely placed in storage onsite and could be there for decades, Mohl said.

Gov. Charlie Baker, who in the past has expressed confidence in the plant's safety, said his concern now is meeting the electric generation needs of the region.

"Losing Pilgrim as a significant power generator not only poses a potential energy shortage, but also highlights the need for clean, reliable, affordable energy proposals," the Republican governor said.

"Pilgrim Nuclear Power Station is just the latest example of how nuclear power simply cannot compete in the current energy market," he said.

He later added: "With this announcement we must also recognize that the time is now in New England and around the nation to rapidly transition toward the safe, affordable clean energy of wind, solar and geothermal power and continue to invest in energy efficiency and making the vehicles on our roads even more fuel efficient."