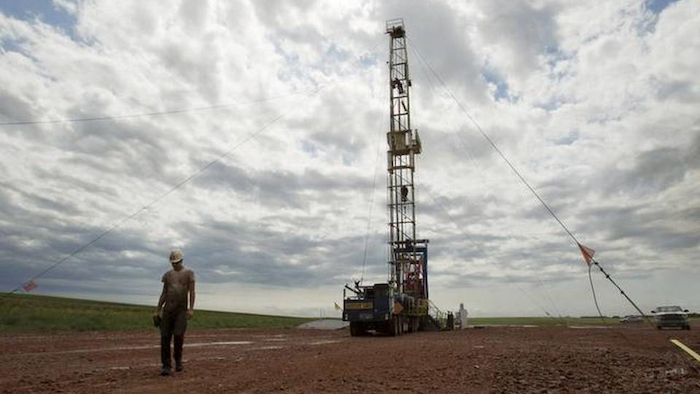 It's the first time the U.S. Energy Information Administration's Drilling Productivity Report forecasted a decrease since it debuted in October of 2013.

Overall, production from the seven U.S. shale deposits tracked by the agency is expected to drop by 57,000 barrels per day between April and May, led by the Eagle Ford formation in Texas and the Bakken formation in North Dakota and Montana. Those areas — the second- and third-most productive shale regions, respectively — should show declines of 33,000 bpd and 23,000 bpd.

The much less productive Niobrara formation, primarily in Colorado and Wyoming, should also see a decrease of 14,000 bpd.

The Permian formation in Texas and New Mexico, the nation's most productive shale deposit, should see an increase of 11,000 bpd next month.

The Utica formation in Ohio should produce about 2,000 additional bpd, while the EIA expects no change in either the southern Haynesville formation or the eastern Marcellus formation.

Natural gas wells from those formations, meanwhile, should see a decline of 23,000 cubic feet per day next month.

Fracking from U.S. shale formations dramatically increased the country's energy output over the last decade and helped contribute to the current glut of crude oil that sent prices plummeting.

Producers shut down wells in efforts to curb costs — less than half of the rigs operating in October remain operational — but those cuts have yet to dramatically affect the oil market. Economists, however, said falling rig counts would eventually lead to an "inevitable cliff" that could lead to a rebound in prices.

“The question is how fast is the decline going to go," Carl Larry of consulting firm Frost & Sullivan told Bloomberg. "If it’s fast, if it’s steep, there could be a big jump in the market.”