General Motors To Sell Van Made By Nissan

Nissan Motor Co. and General Motors Co. have signed a deal for Nissan to build small commercial vans that GM will sell in the U.S. and Canada, the companies said Tuesday. The vans will be based on the Nissan NV200 and will be sold at Chevrolet dealers starting in the fall of 2014. 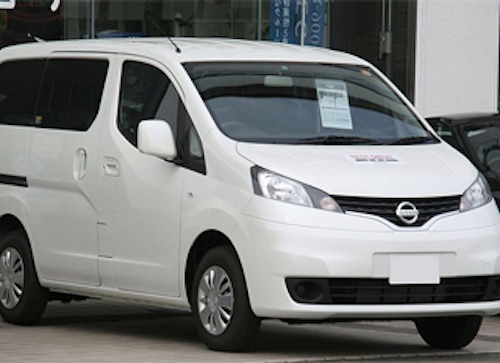 DETROIT (AP) — Nissan Motor Co. and General Motors Co. have signed a deal for Nissan to build small commercial vans that GM will sell in the U.S. and Canada, the companies said Tuesday.

The vans will be based on the Nissan NV200 and will be sold at Chevrolet dealers starting in the fall of 2014. It will be called the Chevrolet City Express, and will compete with Ford's Transit Connect, a small van used by florists, plumbers, delivery services and other businesses across the nation.

GM said it's offering the vans because fleet business customers have asked for a small van, and because GM didn't have a similar vehicle in its global product portfolio to compete with Ford. The deal with Nissan also gets GM into the small commercial van market quickly to compete with Ford, said Charlie Klein, GM's executive chief engineer for global vans.

"It just makes all the smart business sense in the world," Ed Peper, GM vice president of fleet sales, said Tuesday. The Nissan van has high quality, and Nissan and GM have been working jointly on the Chevrolet version, he said.

Peper would not disclose financial terms of the GM-Nissan deal.

GM did not release prices for the new van, but Nissan is now selling the NV200 for a basic sticker price around $20,000. The van has rear cargo doors, sliding side doors and comes with a two-liter, four-cylinder engine that gets 24 miles per gallon in combined city and highway driving. It also has 122.7 cubic feet of cargo space, according to Nissan, which sells the van in the U.S. as well as several global markets.

Last year New York City officials approved the NV200 to be used as its new yellow cab. The Nissans will replace more than 13,000 existing cabs as they are retired. They will be phased-in beginning this fall. The vans have more leg room than current cabs, a large skylight roof to gaze at the city skyscrapers and even odor-reducing and anti-microbial fabric to help deal with unpleasant smells.

Nissan said the deal is an example of the company finding partners to expand markets for its products, helping the company grow and use more of its manufacturing space.

Nissan's NV200, built in Cuernavaca, Mexico, has been on sale in the U.S. for about a month, and Nissan sold 247 of them. Ford has sold just over 13,000 Transit Connect vans through April.