It was the biggest quarterly decline in nearly two years. 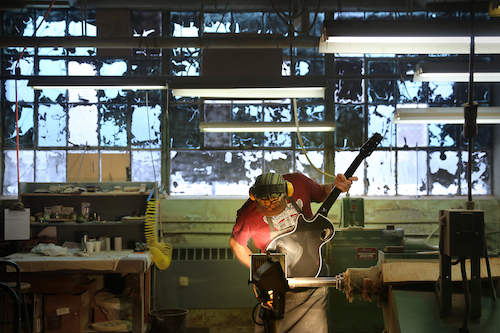 In this March 25, 2015, file photo, Willard Fenton-Miller polishes a Heritage guitar at a factory in Kalamazoo, Mich. On Thursday, Feb. 4, 2016, the Labor Department issues preliminary data on productivity in the fourth quarter of 2015. (Mark Bugnaski/Kalamazoo Gazette-MLive Media Group via AP)

The Labor Department said Thursday that productivity — the amount of output per hour of work — fell at an annual rate of 3 percent in the fourth quarter. It was the biggest quarterly decline in nearly two years.

Productivity last year edged up a slight 0.6 percent after a tiny 0.7 percent gain in 2014. It has been weak since 2011, a troubling development given that productivity is a key ingredient needed for rising living standards. Rising productivity enables businesses to pay employees higher wages without having to boost the cost of the products and services they sell.

Labor costs rose 4.5 percent in the fourth quarter but were up a more modest 2.4 percent for the year.

"The biggest medium-term threat to the living standards of Americans is the chronic lack of productivity growth," said Paul Ashworth, chief U.S. economist at Capital Economics.

Inflation is muted at the moment, given the plunge in energy prices and the strength in the dollar. But he said those temporary factors will fade in coming months, which is likely to lead to higher inflation due to rising labor costs.

"Unit labor costs are ... mounting because firms are having to employ so much more labor to expand production," he said.

The Federal Reserve keeps watch on both productivity and labor costs as it deliberates how quickly it should raise interest rates to keep inflation under control. The Fed raised a key rate by a quarter-point in December, the first increase in nearly a decade. But weaker economic data and turbulent financial markets may reduce the number of rate hikes this year from what had been an expected four down to perhaps just two.

Last week, the government reported that total output, as measured by the gross domestic product, slowed to a meager 0.7 percent growth rate in the fourth quarter. GDP had expanded at a faster 2 percent rate in the July-September period.

Productivity recently has been growing well below the 2.1 percent average gains seen over the past 67 years. It had accelerated for a decade starting in 1995. Those gains were attributed to improvements in computer software and the introduction of technology that helped workers do their jobs more efficiently.