Chinese Manufacturing Index At Weakest Since 2012

Production fell, factories cut jobs and new orders, which are a sign of overall demand, slipped into contraction last month, according to the report by the China Federation of Logistics and Purchasing. 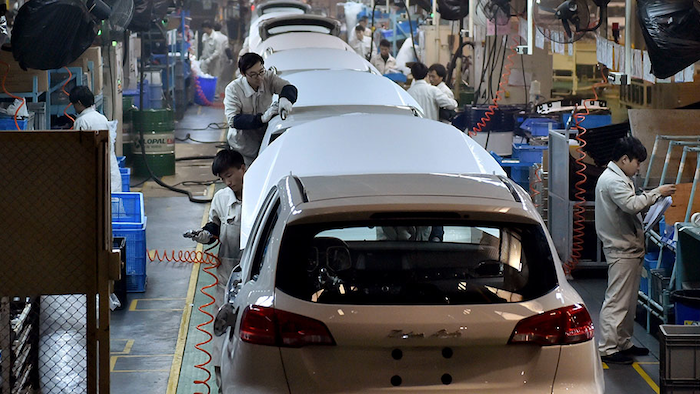 HONG KONG (AP) — Chinese manufacturing ebbed in January to its lowest in more than three years, a possible sign of further weakness in the world's No. 2 economy after posting its slowest annual growth in a quarter century.

An index based on an official survey of factory purchasing managers fell to 49.4 last month from December's 49.7. It was the sixth straight month of deteriorating conditions in China's massive manufacturing sector, which employs many millions of workers. The index released Monday uses a 100-point scale on which numbers below 50 indicate contraction.

The latest reading is also the lowest since August 2012 and worse than many economists were expecting. Production fell, factoriescut jobs and new orders, which are a sign of overall demand, slipped into contraction last month, according to the report by the China Federation of Logistics and Purchasing.

China's economic growth has been steadily falling for the past half-decade as Beijing attempts to wean the economy off a tired model based on exports and investment in infrastructure in favor of domestic consumption and services. However, an unexpectedly sharp decline over the past two years has stoked fears of a politically dangerous spike in job losses.

China's economy grew 6.9 percent last year, which was its slowest expansion in 25 years.

Separately, the private Caixin/Markit purchasing managers' index showed marginal improvement, with the index edging up to 48.4 in January from 48.2 in December.

"Recent macroeconomic indicators show the economy is still in the process of bottoming out and efforts to trim excess capacity are just starting to show results," said He Fan, chief economist at Caixin Insight Group. "

The pressure on economic growth remains intense in light of continued global volatility," said Fan, who called for policymakers in Beijing to continue rolling out finely tuned stimulus measures as needed to prevent growth from slowing too sharply.

Economic data from China are typically distorted by the Lunar New Year holiday, with factories stocking up on raw materials and rushing to fill orders before closing for an extended break that starts at different times in January or February. This year's holiday starts in a week's time.

Meanwhile, activity in China's service industries also eased off. An official purchasing mangers' index for services slipped to 53.5 in January from 54.4 the month before.