The number of people seeking unemployment benefits rose last week to the highest level since July, though applications remained at historically low levels. 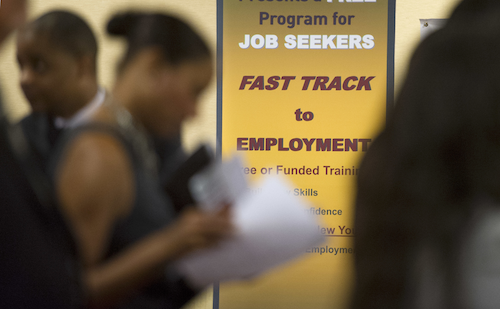 In this May 30, 2013, file photo, job seekers line up to talk to recruiters during a job fair held in Atlanta. On Thursday, Jan. 21, 2016, the Labor Department reports on the number of people who applied for unemployment benefits a week earlier. (AP Photo/John Amis, File)

THE NUMBERS: Weekly applications for unemployment aid rose 10,000 to a seasonally adjusted 293,000. The four-week average, a less volatile measure, increased to 285,000, the highest since April. The number of Americans receiving aid has fallen nearly 9 percent in the past year to 2.2 million.

THE TAKEAWAY: The applications figure remains below 300,000, where it has stood since last March. That is a low level that points to few layoffs. Yet it has increased nearly 10 percent in the past month. The rise could reflect volatility in the data after the winter holidays, when many temporary retail employees are laid off. The government adjusts the figures to reflect those seasonal trends, but isn't always able to do so perfectly.

KEY DRIVERS: Global financial markets have plunged since the year began over fears that world economic growth is slowing by more than most analysts expected. A sharp plunge in oil prices has also unnerved investors, who see it as a potential sign of slower growth.

Applications for unemployment aid are a proxy for layoffs and can indicate whether businesses are sufficiently nervous about the economy to cut jobs. Some companies have announced job cuts in recent weeks, including Johnson & Johnson, Regions Bank and Aeropostale.

BIG PICTURE: Even with all the gloom in financial markets, consumers are still willing to splash out on restaurant meals, autos and travel, providing crucial support to the economy. That is helping to offset the impact of a strong dollar and slower overseas growth, which has hurt manufacturers.

So far, most economists expect the U.S. economy to continue growing this year, though at a slow pace, despite the headwinds from overseas.