A robust U.S. economy and job market, plus low mortgage rates, should help keep the recovery in the new-home market going at a modest pace this year, but a return to pre-housing boom sales and construction levels isn't imminent. 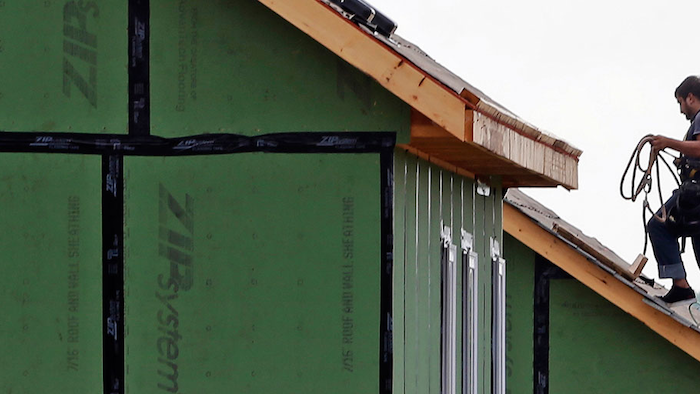 LAS VEGAS (AP) — A robust U.S. economy and job market, plus low mortgage rates, should help keep the recovery in the new-home market going at a modest pace this year, but a return to pre-housing boom sales and construction levels isn't imminent.

That's the forecast that David Crowe, chief economist for the National Association of Home Builders, delivered Tuesday during a panel of economists at the trade association's latest industry convention in Las Vegas.

And despite the U.S. economy's mixed track record of growth in 2015, Crowe projects that the economy will expand 2.7 percent this year, the strongest gain since before the Great Recession in 2008, as consumer spending continues to grow.

"There are a number of positive indicators out there that make me believe ... this will be a good year for the economy and for housing," Crowe said. "Not only is housing finally driving some of that, housing is finally moving at a much faster pace than the economy."

U.S. homebuilders are entering 2016 feeling better about their sales prospects than they have in years, thanks to rising home prices and gradually improving sales.

Even so, sales and construction have yet to rebound fully from the housing bust nearly a decade ago.

Whether that progress continues this year will depend largely on the U.S. economy continuing to improve.

That's come increasingly into doubt lately. Faltering growth in countries like China, the world's second-largest economy, and financial market turmoil have heightened concerns that the U.S. economy could be in for a stumble.

There aren't any major signs pointing to that, however, argued another panelist, David Berson, chief economist at Nationwide Mutual Insurance's Nationwide Economics.

"All of the economic data we look at in the last 50 to 100 years is not flashing warning signs right now," Berson said. "The stock market is not a very good leading indicator of the economy. I'm not terribly concerned that the economy is going to fall into recession."

He also predicted broad sustained growth for housing this year. The exception: Some of the markets where prices have been rising much faster than income, such as Dallas, or cities that have been reliant on the oil industry for jobs and are now being squeezed by the steel drop in oil prices.

The residential construction sector is still recovering from the housing bust and the Great Recession, which officially ended more than six years ago.

New-home sales remain below their 52-year historic average of 655,200 as of November. Yet prices are rising. The median new-home sales price was up 0.8 in November from a year earlier to $305,000.

Hiring was relatively strong last year, with employers adding about 245,000 jobs a month.

"Unlike past recoveries, employment and the strength of employment is what gives people confidence, gives them income and allows them to feel comfortable in taking on a mortgage," Crowe noted.

His forecast calls for single-family home construction to reach 840,000 this year, up from a projected 711,000 last year. That's still down from the 1.3 million pace the industry averaged between 2000 and 2003, before the housing boom.

Homebuilders, which typically hire subcontractors to do construction, carpentry, plumbing and other work involved in building a home, have been struggling with delays and higher costs because of a shortage in labor.

A NAHB survey this month found that three-fourths of builders who responded listed the labor shortage as their top concern heading into this year.

Many are also struggling to find land that's for sale and ready to build.

"And there's still difficulty in buyers getting mortages, so those will keep (2016) from being even more robust," Crowe said.