Over the past 12 months, the number of people collecting benefits has fallen 6.3 percent to 2.3 million. 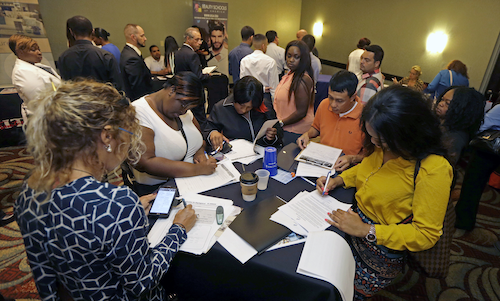 THE NUMBERS: Applications for jobless aid rose 4,000 to a seasonally adjusted 284,000, the Labor Department said Thursday. The less volatile 4-week average rose 3,000 to 278,750. Over the past 12 months, the number of people collecting benefits has fallen 6.3 percent to 2.3 million.

THE TAKEAWAY: The stock market has suffered a tumultuous start to 2016, but U.S. employers largely appear to be confident in the economy. Consumers have stayed resilient despite global challenges as growth prospects in China have become increasingly uncertain and oil prices flirt with a low $30 a barrel.

Layoffs generally tend to rise in the early weeks of January as retailers let go of holiday workers, but even on an unadjusted basis jobless claims are lower than a year ago.

KEY DRIVERS: Outside of the manufacturing sector that has been hit by worldwide pressures and the stronger dollar, most U.S. businesses still see rising levels of demand. This has led them to hold onto workers and look to expand their staff. Jobless claims have stayed below 300,000 for the past 10 months, a level consistent with strong hiring.

The government employment report released last Friday showed that employers added a net 292,000 jobs in December as the unemployment rate held at 5 percent.

BIG PICTURE: The more than six-year recovery from the Great Recession has been fueled by a gradual rebound by consumers. Auto sales accelerated to record highs in 2015, just as home sales and spending at restaurants and online retailers advanced. These sectors have thus far been insulated from the slowdown that has sent financial markets reeling in the opening weeks of 2016.