Stronger customer demand has given most businesses confidence to hire even though some sectors — notably manufacturing and oil and gas drilling — are struggling. 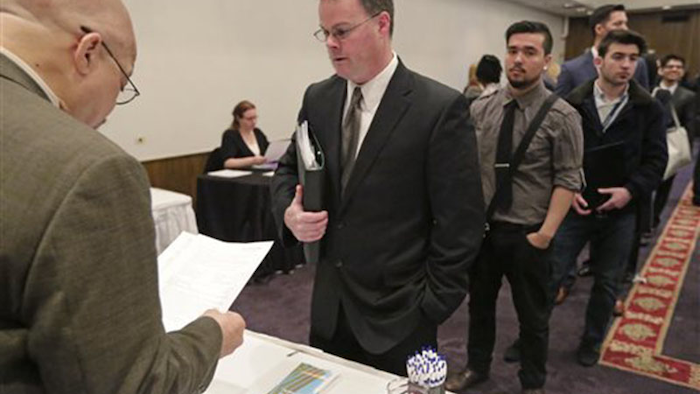 In this April 22, 2015 photo, Ralph Logan, general manager of Microtrain, left, speaks with James Smith who is seeking employment during a National Career Fairs job fair in Chicago. For months, U.S. employers have steadily added jobs even as global growth has flagged and financial markets have sunk. The jobs report for December on Friday, Jan. 8, 2016, may provide some hints of whether that trend can endure. (AP Photo/M. Spencer Green)

WASHINGTON (AP) — For months, U.S. employers have steadily added jobs even as global growth has flagged and financial markets have sunk. Friday's jobs report for December may provide some hints of whether that trend can endure.

Most economists are optimistic about last month: They have forecast that employers added a healthy 200,000 jobs and that the unemployment rate remained at a low 5 percent for a third straight month, according to data firm FactSet.

What's behind the positive outlook? Most analysts expect solid U.S. consumer spending to offset weakness overseas. Stronger customer demand has given most businesses confidence to hire even though some sectors — notably manufacturing and oil and gas drilling — are struggling.

If employers continue to hire steadily and to raise wages consistently, consumers are expected to keep spending and to support U.S. economic growth even if foreign economies struggle.

Still, stumbling growth in countries like China, the world's second-largest economy, and financial market turmoil could pose long-term challenges for the U.S. economy. A strong dollar and faltering global growth have cut into exports of factory goods.

The dollar has climbed about 10 percent in value in the past year compared with overseas currencies. That has made U.S. goods more expensive globally while lowering the price of imported products.

In November, exports fell to their lowest level in nearly four years. That trend contributed to a 5 percent increase in the nation's trade gap in the first 11 months last year.

The wider trade deficit shaved about 0.6 percentage point from the economy's growth in 2015, according to Goldman Sachs. Most analysts estimate that the economy expanded at a modest pace 2.5 percent last year.

Another blow to manufacturing has been oil prices, which fell to their lowest level in 12 years Thursday. Oil and gas drillers have responded by slashing payrolls and sharply cutting spending on steel pipes and other drilling equipment.

Manufacturers added just 17,000 jobs last year through November, their worst such showing since the recession ended in 2009. By contrast, they had gained 215,000 jobs in 2014. The mining sector, which includes oil and gas drilling, lost 124,000 jobs last year — about 14 percent of its total.

Yet manufacturing makes up just 10 percent of the U.S. economy and oil and gas drilling even less. Consumer spending accounts for roughly 70 percent.

In another sign of consumer health, auto sales rose to a record high last year as cheap gas and low interest rates led to booming sales of SUVs and pickup trucks.

Lower gas prices may have hurt the oil patch, but they should benefit consumers by cutting their gas bills. Average gas prices nationwide fell just below $2 a gallon Thursday, down almost 20 cents from a year ago.

Chris Christopher, an economist at IHS, a forecasting firm, estimates that American households saved, on average, $722 last year from cheaper gas. He expects them to save an additional $217 in 2016 given the continuing drop in oil prices.

"Looking ahead, the positives clearly outweigh the negatives on the consumer front," he said.