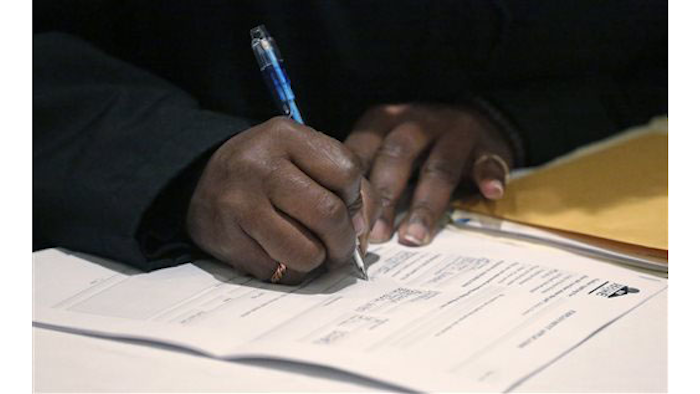 THE NUMBERS: Applications for jobless aid fell 10,000 to a seasonally adjusted 277,000, the Labor Department said Thursday. The less volatile 4-week average dipped 1,250 to 275,750. Over the past 12 months, the number of people receiving benefits has fallen 8.3 percent to 2.2 million.

THE TAKEAWAY: U.S. employers appear to be secure, even as the Chinese stock market is collapsing, oil prices are plunging and Europe continues to slowly nurse its way back to financial health. The relatively low level of applications for unemployment aid indicates that job growth should be healthy in the December jobs report being released by the government Friday.

Weekly figures below 300,000 — a level not seen in the past 10 months — tend to correspond with strong monthly job gains. Applications for benefits are a proxy for layoffs, so the consistent lows for claims suggest that employers are holding onto staff and possibly looking to expand.

KEY DRIVERS: Businesses expect their revenues to keep improving, increasing their need for workers even as the manufacturing sector copes with a broader global slowdown that has hurt exports abroad and turned the financial markets volatile. Employers have hired about 210,000 workers a month this year. And unemployment last month held at a seven-year low 5 percent.

BIG PICTURE: Consumers have kept the more than six-year recovery from the Great Recession going. Auto sales climbed last year to record levels, while home sales and spending at restaurants and online retailers improved. Still, low oil prices and weak international demand coming out of Europe, China and several emerging economies such as Brazil are raising alarms about a global slowdown.