U.S. manufacturers contracted in December at the fastest pace in more than six years as factories cut jobs and new orders shrank. 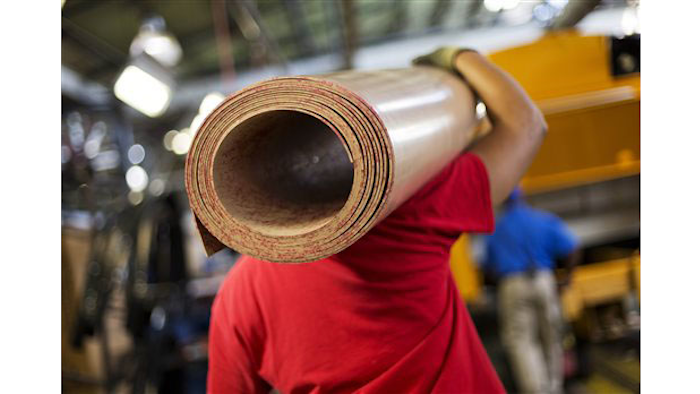 In this Friday, Sept. 18, 2015, photo, a worker carries a roll of sub flooring to be installed in a school bus on an assembly line at Blue Bird Corporation's manufacturing facility, in Fort Valley, Ga. The Institute for Supply Management, a trade group of purchasing managers, issues its index of manufacturing activity for December, on Monday, Jan. 4, 2016. (AP Photo/David Goldman)

The Institute for Supply Management said Monday that its index of factory activity fell to 48.2 from 48.6 in November. Any reading under 50 signals contraction.

The figures suggest that the troubles weighing on manufacturers last year — slow overseas growth, a strong dollar and low oil prices — will likely continue into 2016.

The ISM report coincides with a survey that found that manufacturing in China contracted for a 10th straight month in December, the latest sign of a weak global economy.

"The factory sector continues to struggle in the face of global headwinds, and there is little reason to expect an imminent turnaround," said Michelle Girard, an economist at RBS Securities.

And slower growth in China, along with weakness in Brazil, Russia and other emerging markets, has reduced U.S. companies' export sales and overseas profits. The strong dollar has compounded the troubles formanufacturers by making U.S. goods more expensive overseas.

A measure of job growth in the ISM report fell sharply last month, evidence that factories cut workers. That raises the likelihood that the U.S. manufacturing sector will report a net loss of jobs when the government issues the December employment report on Friday. Over the first 11 months of 2015, manufacturers barely added any jobs.

In the ISM report for December, a gauge of new orders ticked up slightly but remained in contractionary territory.

Several executives at companies surveyed by the ISM blamed low oil prices for weak sales. Some businesses said that efforts to reduce stockpiles of goods have also held back orders.

At the same time, a company in the plastics and rubber industry credited low oil prices for boosting sales of cars and SUVs and lifting its orders.

The ISM, a trade group of purchasing managers, surveys about 200 companies each month.