The new tax would be part of a broader effort to target what experts say is roughly $2 trillion in profits U.S. companies are hoarding abroad to reduce their taxes. 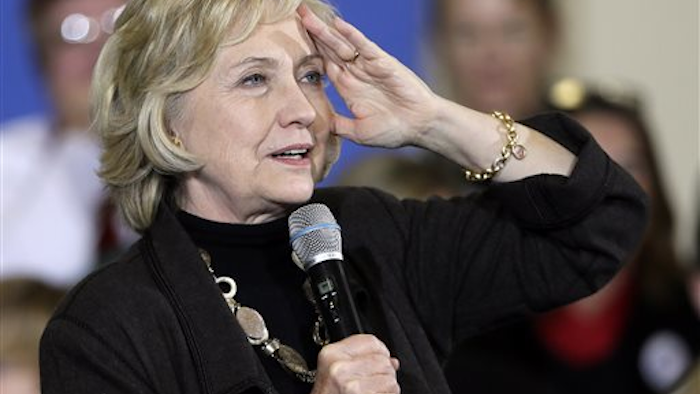 In this Friday, Dec. 4, 2015, file photo, Democratic presidential candidate Hillary Clinton speaks during a town hall meeting in Fort Dodge, Iowa. Clinton will unveil a proposal for a new “exit tax” on Wednesday, Dec. 9, aimed at cracking down on corporate inversions, in which U.S. companies merge with corporations overseas in an effort to lower their tax bill. (AP Photo/Charlie Neibergall, File)

WASHINGTON (AP) — Hillary Clinton on Wednesday will unveil a proposal for a new "exit tax" aimed at cracking down on corporate inversions, a practice that permits U.S. companies to merge with corporations overseas to lower their tax bill.

The new tax would be part of a broader effort to target what experts say is roughly $2 trillion in profits U.S. companies are hoarding abroad to reduce their taxes. The Democratic presidential front-runner will propose spending the revenue raised by the new tax to boost manufacturing jobs in the U.S., campaign aides said. They spoke on condition of anonymity ahead of the official campaign announcement.

Clinton's proposals are part of the economic agenda her campaign has been rolling out this month. They include boosting infrastructure spending by $275 billion and making other new investments in research and clean energy.

Her new jobs plans come amid charges that Clinton's personal and political fortunes are far too intertwined with Wall Street, a position rivals like Vermont Sen. Bernie Sanders say will prompt her to take a softer position toward regulating — and taxing — American corporations.

Clinton and her husband, former President Bill Clinton, made at least $35 million by giving 164 speeches to financial services, real estate and insurance companies after leaving the White House in 2001, according to an Associated Press analysis of public disclosure forms and records released by her campaign.

In an op-ed published on Monday, Clinton pledged to take a tough approach toward financial regulation, saying she would impose a new risk fee on big banks, strengthen oversight and impose tougher penalties on executives and institutions that break the rules.

"Republicans may have decided to forget about the financial crisis that caused so much devastation — but I haven't," she wrote in the New York Times. "The proper role of Wall Street is to help Main Street grow and prosper."

Her proposal received the crucial support of Massachusetts Sen. Elizabeth Warren, a progressive leader on fiscal issues who's remained staunchly neutral in the Democratic primary race.

"Secretary Clinton is right to fight back against Republicans trying to sneak Wall Street giveaways into the must-pass government funding bill," wrote Warren on her Facebook page.

The November announcement of a plan to merge drug-makers Pfizer and Allergan to create the world's biggest pharmaceutical company reignited a fierce political debate over whether such deals should be permitted.

Under the deal, New York-based Pfizer would move its headquarters to Ireland, where Allergan is based. That would enable Pfizer to slash its tax rate from around 25 percent this year to about 18 percent. Ireland's lower corporate tax rate would have saved Pfizer nearly $1 billion of the $3.1 billion in U.S. taxes it paid in 2014.

Though the Treasury Department has unveiled new rules to deter companies from considering inversions, officials say only Congress has the authority to halt the practice. Democrats favor immediate action and are seeking to use the issue as a political wedge ahead of next year's presidential election, accusing the GOP of protecting corporate loopholes. Top Republicans say the only way to adequately address inversions is to overhaul the tax code, making it more attractive for businesses to locate in the U.S.

Clinton has said she has "deep concerns" about the $160 billion drug company merger and has called on Congress and regulators to act immediately to stop companies from shifting profits overseas.

"They're doing it to save money on taxes," she said last month at a campaign event in Boulder, Colorado. "I want the Treasury Department to do everything it can to stop that kind of behavior and call it for what it is: gaming the tax system."

Under current rules, U.S. companies can reincorporate abroad if they acquire a foreign company and transfer more than 20 percent of their shares to foreign owners. The Obama administration has proposed raising that threshold to more than 50 percent. Clinton will reiterate her support for the change this week. The White House and Clinton believe that new standard would discourage inversion deals by requiring the U.S. company to purchase a larger foreign entity.

Any company that still attempts to move its headquarters overseas for tax reasons would be subject to the new exit tax, which would levy taxes on foreign earnings at the time of the inversion deal. The profits a U.S. company earns overseas are not taxed until they are brought back into the U.S., prompting many companies to hold cash and invest abroad to avoid the taxes.

Clinton's main rival for the Democratic nomination, Vermont Sen. Bernie Sanders, introduced legislation in April that would continue to tax companies involved with inversion deals as American corporations as long as they remain U.S.-majority owned.