The future of state laws that regulate everything from the size of a hen's cage to the safe consumption of Gulf oysters may be at stake as farm bill negotiators work to resolve a long-simmering fight between agriculture and animal welfare interests. 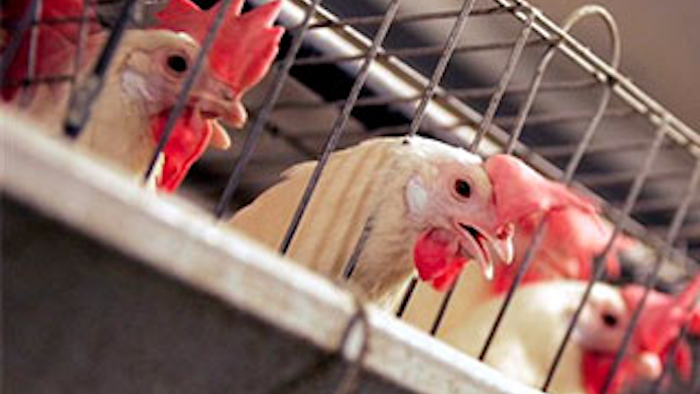 WASHINGTON (AP) — The future of state laws that regulate everything from the size of a hen's cage to the safe consumption of Gulf oysters may be at stake as farm bill negotiators work to resolve a long-simmering fight between agriculture and animal welfare interests.

The House Agriculture Committee added language to its version of the farm bill earlier this year that says a state cannot impose certain production standards on agricultural products sold in interstate commerce. The provision, authored by Rep. Steve King, R-Iowa, is aimed at a California law that will require all eggs sold in the state to come from hens that inhabit cages in which they can spread their wings — a major burden for egg producers in Iowa and other states who don't use large cages and still want to sell eggs to the lucrative California market. The law goes into effect in 2015.

"Bottom line of it is no state should be allowed to regulate production in other states," King said at a meeting of House-Senate negotiators last month.

But opponents say that depending on how the language is interpreted, the provision could lead to challenges of dozens of other state laws — including some aimed at food safety, fire safety and basic consumer protections.

Concern over King's language has the potential to threaten the entire farm bill, which congressional leaders are hoping to finish by the end of the year. Sen. Debbie Stabenow, D-Mich., chairwoman of the Senate Agriculture Committee, said she has "great concern" about King's language, which is not in the Senate version of the farm bill. Led by the Humane Society of the United States, a wide range of groups including the National Association of State Legislatures, the National Fraternal Order of Police and the Consumer Federation of America are all lobbying against the measure.

King's language cites the Commerce Clause of the Constitution, which prohibits discrimination against interstate commerce. He says California's law does just that — imposing its own standards on how producers in Iowa and elsewhere do their business.

Concern about other laws that could be affected is just a ploy by animal rights activists — or, as he calls them, the "vegan lobby" — to discredit his provision, King said.

King said he believes the provision is written narrowly enough so that the other laws would not be affected. As written, the provision would not allow a state to impose "a standard or condition on the production or manufacture of any agricultural product sold" if the product is manufactured out of state and those standards go beyond federal law and the law of the state in which it is produced.

Still, some groups worry the language is not specific enough and could apply broadly:

— Fire safety groups say the language potentially could apply to fire-safe cigarettes that have a reduced propensity to burn when left unattended. Because tobacco is an agricultural product, they worry that state laws requiring sale of these fire-safe cigarettes could be affected if challenged in court.

— Food safety groups say they are concerned that King's amendment could threaten laws like California's statute requiring that oysters from the Gulf of Mexico be pasteurized, a measure that has helped reduce illnesses in that state.

— The attorneys general of Arkansas and Mississippi have written letters to Capitol Hill opposing the amendment. "Due to the provision's vagueness and overly broad language, it is unclear exactly what impact the King amendment could have on our state's ability to enforce its own laws and to protect Arkansas businesses and consumers," wrote Arkansas Attorney General Dustin McDaniel, a Democrat.

— The National Conference of State Legislatures says the language would "pre-empt" state agricultural laws designed to protect the safety and well-being of farmland, waterways, forests and people.

The genesis of the amendment is a longtime fight between agriculture and the Humane Society, which has pushed states to pass animal welfare laws. In addition to egg farmers, other animal producers — particularly hog producers, many of whom use confinement crates for sows — are trying to fend off efforts by the Humane Society and other animal rights groups. King's home state of Iowa is the top pork-producing state, and some farmers worry they could lose their operations if forced to make the expensive crate changes those groups have sought.

The Humane Society is aggressively lobbying against the King amendment. Wayne Pacelle, the group's president, calls the amendment "an enterprise-level threat to the animal welfare movement."

Though powerful agriculture groups have lined up in support, as have House Agriculture Committee leaders, the amendment has bipartisan opposition — notably from some Republicans who believe it attacks states' rights.

"Just trying to attack the Humane Society I think is very shortsighted," said Rep. Jeff Denham, R-Calif. "You don't throw out the Constitution because you want to attack one certain group."

King argues he is fighting for the right of states like Iowa to produce eggs and other products as they see fit, and to be able to sell them in a free market. He says the examples of affected laws are overblown, and would not apply because those laws don't dictate specifically how an agricultural product is to be produced.

Carl Tobias, a professor at the University of Richmond School of Law, said he's not so sure, adding that the law could be "subject to multiple interpretations."

"It says it's based on the Commerce Clause but I don't think that's the end of the story," he said.