Brennan's Restaurant — "A New Orleans Tradition Since 1946" — in the French Quarter is closed, the latest shoe to fall in 40 years of headline-grabbing family discord and costly litigation over matters of control, money and use of the family name. 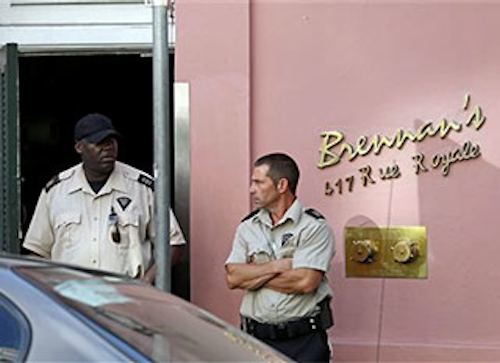 On your left is Ralph Brennan's Red Fish Grill. A few doors down is Dickie Brennan's Steakhouse and, nearby, his Bourbon House seafood eatery. Dickie's latest, Tableau, sits near St. Louis Cathedral.

Mr. B's Bistro (managing partner: Cindy Brennan) is at the corner of Iberville and Royal, while SoBou, another Brennan project, has opened next to the tony W hotel. There's also the venerable Commander's Palace, over in the Garden District.

Of course, you could always drop by the spiritual base of the dynasty at 417 Royal Street, home of bananas Foster, sumptuous courtyard breakfasts and dinners of fresh seafood or prime meats awash in what one glowing review called "a Niagara of familiar sauces — hollandaise, meuniere, marchand de vin, béarnaise and choron."

But you won't get in. Not even with a reservation.

Brennan's Restaurant — "A New Orleans Tradition Since 1946" — is closed, the latest shoe to fall in 40 years of headline-grabbing family discord and costly litigation over matters of control, money and use of the family name.

Golden lettering that once spelled out "Brennan's" has been pried from the 18th century pink town house on Royal, leaving gray gashes in the stucco and, perhaps, an even deeper wound in the psyche of a city keen on its culinary history.

"It diminishes New Orleans in a way that we cannot afford to be diminished," says local food writer Poppy Tooker, as the latest case of Brennan v. Brennan drags on in federal court.

Brennan's the restaurant — and the Brennans themselves — have always been about more than dining. Their establishments launched celebrity chefs such as Emeril Lagasse. Family members founded the star-filled Mardi Gras parade Bacchus, and have worked to promote the city's tourism industry as a whole.

That there have been quarrels is hardly news in New Orleans. But when word of the closure at 417 Royal hit websites and social media, it raised anew questions about the future of the hallowed site and the Brennan legacy.

"The fact that it closed amid family squabbles is just kind of unseemly," says Bret Thorn, food editor of Nation's Restaurant News magazine.

"It's just such a great, great institution," says Tim Zagat, co-founder of the Zagat restaurant guide. "With the spaces inside, the famous dishes that they created. It would be a shame to lose it."

The gastronomic dynasty began in the 1940s on Bourbon Street. Owen E. Brennan owned the Old Absinthe House bar when, according to New Orleans lore, he opened his namesake restaurant in part to answer a challenge: Fellow restaurateur "Count" Arnaud Cazenave jokingly questioned the ability of an Irishman to run anything better than a hamburger joint.

Owen succeeded with fine cuisine, powerful cocktails, imported wines and promotional savvy. He pushed chef Paul Blange to create a banana-based dessert because New Orleans was a major importer of the fruit. While other establishments focused on the dinnertime experience, Owen promoted "Breakfast at Brennan's," featuring a courtyard view and rich egg creations.

"It was a truly important restaurant in the national scheme of things," says Zagat.

It was also a family affair. When Owen died in 1955, as the restaurant was relocating from Bourbon to Royal Street, the running of the business fell to his five siblings — Ella, Adelaide, John, Dick and Dottie — and, as they grew older, sons Ted, Jimmy and Owen Jr., known as Pip.

They expanded, opening restaurants in Mississippi and Texas and acquiring Commander's Palace.

And, famously, they feuded.

"There were disagreements," says Ralph Brennan, John's son and a successful developer of restaurants in his own right, who was in college when the cracks developed. "There are obviously different sides to the story."

The problems started in 1973 as Owen's sons voiced worries that expansions were spreading the business too thin. Ultimately, Owen's widow and sons assumed control of the original Brennan's while his siblings and their children took over Commander's Palace and other family restaurants.

Since then, the original Brennan's has survived a 1975 fire, ups and downs in the economy and damage from Hurricane Katrina. All the while the feuding continued. One expensive battle pitted Owen's sons against cousin Dickie Brennan over the right to use the family name at his steakhouse.

Further rifts have developed among the relatives who ran the flagship restaurant, spawning complicated litigation involving, among other things, who owns controlling shares of the business.

This spring, as that dispute played out in court, police were called to the original Brennan's when one family member tried to call a staff meeting against the wishes of other relatives. Court records state that the confrontation ended peacefully. But it generated new headlines, and portended the end for Brennan's.

This past spring, Ralph Brennan and a business partner bought the building in foreclosure.

Ralph says he first reached across the family divide in 2011 to talk with Ted about saving the original Brennans. A takeover, he says, is not what he had planned.

"I wanted to help my cousins keep the restaurant," he says, adding: "We're still family ..."

Attempts this past spring to reach a lease agreement with his squabbling cousins failed. Brennan's Restaurant was evicted, and in June waiters and staff arrived for work to find the doors to Brennan's locked.

Around town, the jokes and jeers came quickly, along with laments over the loss of the landmark.

"A real shame," wrote one reader on NOLA.com. "Greed knows no bounds," opined another. Someone suggested the feud could be fodder for a new reality TV show, "about a bunch of rich privileged 'kids' who want more ..."

Pip Brennan is trying to reverse the foreclosure in court. In filings, he faults his brother Ted and a niece for doing nothing to stop the sale. Neither brother responded to interview requests, but Pip issued a brief statement Wednesday: "Though we no longer own the Royal Street location, it is our hope to open a new Brennan's Restaurant to continue our family's tradition of fine dining and impeccable service."

Ralph Brennan hopes by spring to open a new restaurant in the Royal Street space, a building he practically grew up in but had rarely visited since the family schism of '73. He remains mum on whether he's willing, or legally able, to use the Brennan name for it.

"I don't know how different it will be yet," he says, "but it will certainly be representative of the family."

No matter what happens with the original Brennan's — or the endless family feuds — the Brennan legacy will survive, says local magazine publisher and historian Errol Laborde. There may be older restaurants in New Orleans — Antoine's, for instance, goes back to the 1800s — but Brennan's influence is undeniable.

"If Antoine's was closed there'd be no legacy," Laborde says. "Brennan's has legacies all over the place."

"I don't think there was any permanent damage," adds food editor Thorn. "I think there was some embarrassment for the family, but an understanding that there had been a longstanding rift among the Brennans. They still are great restaurateurs ... "

Besides, Thorn says: "I think everybody understands family feuds. We all have them."