China's leaders finished a closely watched policy meeting Tuesday with a promise to give market forces a bigger role in the country's state-dominated economy, but the meeting failed to produce dramatic reforms to overhaul a worn-out growth model. 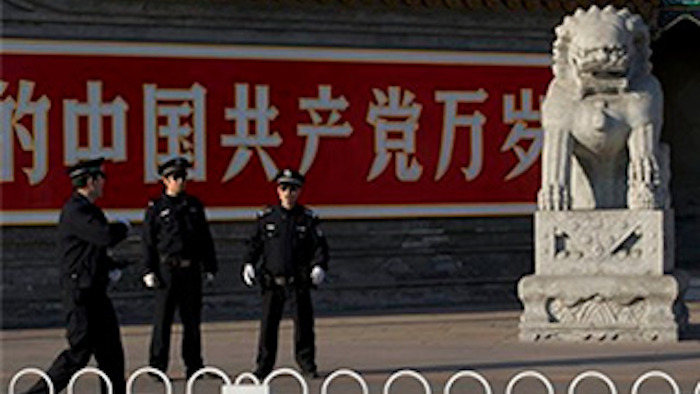 BEIJING (AP) — China's leaders finished a closely watched policy meeting Tuesday with a promise to give market forces a bigger role in the country's state-dominated economy but failed to produce dramatic reforms to overhaul a worn-out growth model.

In a report after a four-day meeting that reform advocates hoped would unleash a wave of change, Communist Party leaders gave an unusually strong endorsement of private companies as "important components" of the economy but said state industries will remain its core.

The market will play a "decisive role" in allocating resources, the party said. The official Xinhua News Agency said that was an upgrade from the "core role" assigned to the market in party policy over the past two decades.

It gave no indication the meeting considered any political reforms in China's closed, secretive one-party system. It said a national security council would be set up to improve security strategy.

Chinese leaders are under pressure to replace a growth model based on exports and investment that delivered three decades of rapid expansion but has run out of steam. Reform advocates say Beijing should open an array of state-controlled industries to private competition, but any moves to curb the privileges of politically favored companies are likely to face resistance.

The party said it will create a committee to "deepen reforms" and gave no indication when more changes might be approved. That suggested party leaders, as many observers expected, agreed on broad themes but put off battles over details such as the status of state companies that control vast swathes of China's economy including banking, energy and telecoms.

"Many of us hoped they would use the opportunity to say something really striking, really pushing forward the momentum, and it's fair to say they have not done that," said Barry Naughton, a specialist in the Chinese economy at the University of California at San Diego.

"I think the way they did it reflects they do not yet have consensus to move forward to dramatically reform."

Another key area that reformers say is ripe for change is control of land. The report said farmers should have more property rights but made no commitments.

All land in China is owned by the state. Farmers are tenants who cannot mortgage or rent their land to buy better seeds and technology. Giving them ownership or at least more control would unlock wealth in the countryside but also might jolt real estate markets and affect local governments that rely on sales of land use rights for revenue.

Because of that, some analysts said land reform is likely to be left until later.

Before the meeting, communist leaders raised hopes and the political stakes by promising "unprecedented" reforms.

The meeting was seen as symbolically significant because it was the 205-member Central Committee's third plenum — or full meeting — of the party's 18th congress. Such meetings at this point in the party's five-year political cycle are seen as a launching pad for changes in economic direction after Deng Xiaoping used a third plenum in 1978 to unveil his reforms.

The plenum offered a platform for President Xi Jinping, who became party leader last year, to make clear his own vision for the world's second-largest economy.

Communist leaders have been trying to make the economy more efficient and productive by gradually injecting more market forces into areas such as bank lending. Regulators eliminated controls on interest rates charged on commercial loans in July in a move that ultimately will lower costs for borrowers with stronger credit records.

Pressure for change has mounted as economic growth tumbled to a two-decade low of 7.5 percent in second quarter of this year. Beijing propped up growth with a mini-stimulus of higher spending on railway construction and other public works but Premier Li Keqiang, the top economic official, has said the leadership wants to focus on longer-term reforms.

The report called for ensuring the public's livelihood and social stability. That would include both more spending on welfare programs to ease political tensions and more intensive monitoring and policing to defuse ethnic unrest or potential political dissent.

Its focus, though, was economic change, which it said will be "the key of overall deepening of reform."

It called for improving the relationship between government and market. That refers to efforts to make the economy more efficient and productive by having the government act as a regulator of free-market competition while withdrawing from making commercial decisions.

"The core is to handle the relationship between government and market, and let the market play the decisive role in allocating resources, and to better play the governmental role," it said.

If it were patterned on the U.S. National Security Council, such an entity would serve as the principal forum for the president to take advice from intelligence, military, police and other advisers, potentially alleviating a chronic problem among Chinese agencies of not sharing information.

China has the world's second-largest defense budget, although it is exceeded by spending on the police and other internal security measures. Anger over land grabs and simmering unrest in Tibet and Xinjiang are the main internal threats, while the ruling party is obsessed with critics among the rising middle class and a lack of discipline in its own ranks.

Externally, China is engaged in territorial disputes with Japan, the Philippines and others, along with potential instability along its border with impoverished, isolated North Korea.