Hershey, the maker of Milk Duds and Reese's peanut butter cups, said Wednesday that its second-quarter profit soared 40 percent thanks to higher demand for its Easter-related chocolate and candy. 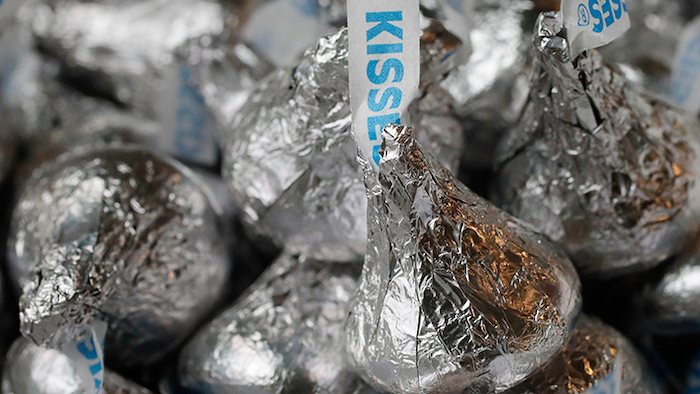 HERSHEY, Pa. (AP) — Hershey, the maker of Milk Duds and Reese's peanut butter cups, said Wednesday that its second-quarter profit soared 40 percent thanks to higher demand for its Easter-related chocolate and candy.

But the company also warned that people are making fewer shopping trips, making it less likely that they'll pick up its gum, mints or chocolate bars at the checkout aisle. As a result, Hershey now expects revenue for the year to grow less than expected.

Shares of Hershey Co. rose 22 cents to $107.70 before the stock market opened Wednesday.

Hershey has been rolling out new snacks to help boost sales, including Hershey's Cookie Layer Crunch, a chocolate bar stuffed with cookies. It plans to spend more on advertising ahead of Halloween and the holiday season.

Earnings, adjusted for non-recurring costs, came to $1.09 per share in the second quarter, beating the 91 cents per share that Wall Street analysts expected, according to Zacks Investment Research.

Revenue rose 1.5 percent to $1.66 billion in the period, which topped Street forecasts of $1.65 billion.

The Hershey, Pennsylvania-based company said it still expects full-year earnings between $4.72 per share and $4.81 per share. It now expects revenue for the year to grow 1 percent from the year before, down from its previous forecast of growth between 2 percent and 3 percent.