The European Union has approved Bayer's buyout of Monsanto in a massive agriculture business deal. 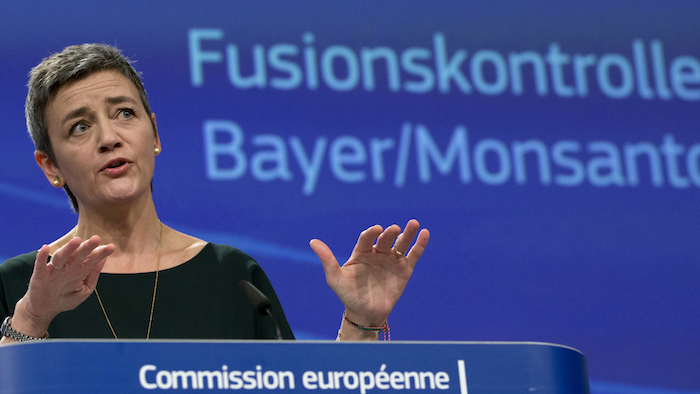 The European Union has approved Bayer's buyout of Monsanto in a massive agriculture business deal, but says they will have to shed over $7.4 billion in firms and other remedies to ensure fair competition in the market.

The $57 billion takeover has been watched by rivals and environmental groups, who are fearful that the number of players in the business of selling seeds and pesticides will shrink further and give one company a suffocating grip on the food chain.

EU Antitrust Commissioner Margrethe Vestager said Wednesday that the remedies proposed by Bayer and Monsanto are worth well over 6 billion euros in business and "meet our competition concerns in full."

Monsanto in September accepted Bayer's offer, in which it also assumes $9 billion in debt, in a move affecting anything from tomatoes and cucumbers to the use of pesticides across the globe. The United States still needs to give its approval to the merger.

Without the remedies, Vestager said that the buyout would have significantly reduced competition in the market and hindered innovation. She said the deal would create the world's largest pesticides and seeds company and therefore needed a large number of remedies to be approved.

"We have made sure that the number of global players actively competing in these markets stays the same," said Vestager. "That is important because we need competition to ensure farmers have a choice of different seed varieties and pesticides at affordable prices."

Bayer CEO Werner Baumann said that "the European Commission's approval is a major success and a significant milestone." He said the companies were still working with U.S. authorities on the deal, which they hope to close in the second quarter of 2018.

Environmentalists were less enthused, claiming that it still amounted to granting Monsanto and Bayer full control on the food chain.

"This is a marriage made in hell," said Nick Flynn, legal director of the Avaaz environmental campaign group. "Now the fight moves to the U.S. where regulators can still stop this."

Vestager said that there had been consultations to get a feel for each other's views on the issue, but added that the EU and U.S. "markets are very different" when it comes to issues like Genetically Modified Organisms, making any prediction of their ruling impossible.

Vestager made her approval dependent on the remedies and business sales.

She said the divestitures remove all overlaps in seeds and pesticide markets and streamlines R&D.

And, Vestager said, Bayer committed to work to keep open the emerging market in digital farming, which focuses on the use of data to guide agriculture. Bayer proposed BASF as the company to take over the business it sells in this sector.