US Chamber of Commerce Warns Trump Against China Tariffs 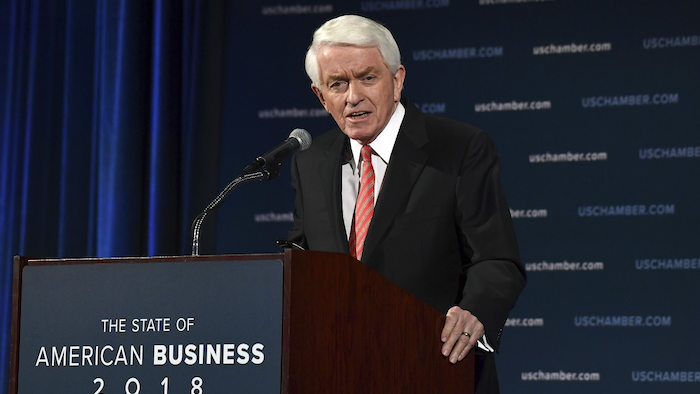 America's largest business lobby is warning President Donald Trump against slapping big tariffs on Chinese imports. The U.S. Chamber of Commerce is sounding the alarm as the White House weighs whether to punish China for forcing U.S. companies to hand technology to Chinese companies.

"Simply put, tariffs are damaging taxes on American consumers," U.S. Chamber President Thomas Donohue said in a statement Thursday. Citing reports that the administration is considering tariffs worth $30 billion a year, Donohue noted that such a tax on Chinese imports would wipe out much of the windfall American families are getting from December's tax cuts.

Donohue also warned that sanctions against China "could lead to a destructive trade war with serious consequences for U.S. economic growth and job creation." The administration last August launched an investigation into Chinese policies that coerce U.S. companies into transferring technology.

Instead of using tariffs, Donohue said, the administration should "work with the business community to resolve the real and justifiable concerns raised by Chinese trade practices."

As a presidential candidate, Trump campaigned on a promise to bring down America's huge trade deficit, which he blamed on bad trade deals and abusive practices by China and other U.S. trading partners.

Only recently, however, has the president begun to turn rhetoric to action. In January, the administration imposed taxes on imported solar panels and washing machines. And last week, Trump ordered stiff tariffs on imported steel and aluminum.

Meanwhile, the Trump administration gave no indication that it planned to let up on its pressure on China over trade. Treasury Secretary Steven Mnuchin will travel to Argentina for meetings next week of the Group of 20 major industrial countries, which includes traditional economic powers and emerging economies such as China.

Officials said that they planned to make China's moves away from a market-oriented economy a major topic of discussion at the meetings.

"The trip to the G-20 will focus on advancing the Trump administration's global economic agenda to level the playing field for U.S. companies and workers," Mnuchin said in a statement.

Treasury officials said they expected substantial discussion at the G-20 meetings on such trade issues as China's continued subsidizing of over-capacity in the areas of steel and aluminum.

The G-20 talks will be held on Monday and Tuesday in Buenos Aires. Mnuchin will also stop in Santiago, Chile, on Wednesday to meet with the newly inaugurated Chilean President Sebastian Pinera and Finance Minister Felipe Larrain.