EU Seeks Clarity On US Tariffs

The European Union is seeking clarity from Washington about whether the 28-nation bloc will be exempt from President Donald Trump's steel and aluminum tariffs, the EU's top trade official said Friday. 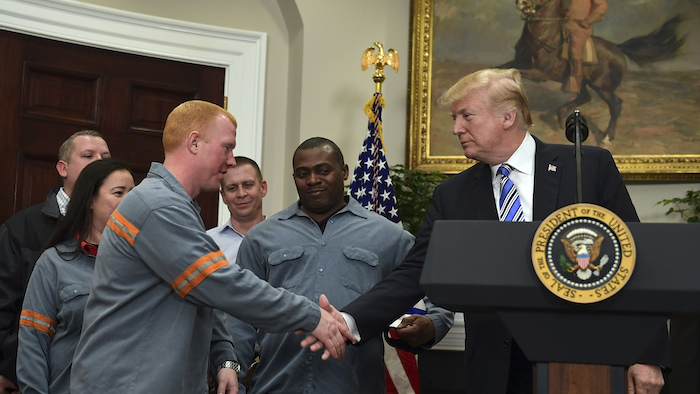 President Donald Trump reaches out to shake the hand of Dusty Stevens, a superintendent at Century Aluminum Potline, during an event in the Roosevelt Room of the White House in Washington, Thursday, March 8, 2018. Image credit: AP Photo/Susan Walsh

The European Union is seeking clarity from Washington about whether the 28-nation bloc will be exempt from President Donald Trump's steel and aluminum tariffs, the EU's top trade official said Friday.

"We hope that we can get confirmation that the EU is excluded from this," EU Trade Commissioner Cecilia Malmstroem told policy makers, experts and reporters at an event in Brussels.

But she warned that if the issue can't be resolved bilaterally or through the World Trade Organization, then "we will have to protect our industry with rebalancing measures."

Trump announced Thursday that he was slapping tariffs of 25 percent on imported steel and 10 percent on aluminum, but he temporarily exempted big steel producers Canada and Mexico — provided they agree to renegotiate a North American trade deal to his satisfaction.

He said other countries could be spared if they can convince the administration that their steel and aluminum exports don't threaten American industry.

Malmstroem will hold talks Saturday with U.S. trade representative Robert Lighthizer. The EU wants to find out exactly what mandate he has and precisely what conditions allow exemptions, but it is ruling out any negotiations for U.S. market access.

The EU has warned that it stands ready to slap "rebalancing" tariffs on about 2.8 billion euros ($3.4 billion) worth of U.S. steel, agricultural and other products, like peanut butter, cranberries and orange juice.

"Everything you have for breakfast," Malmstroem said. She noted that under WTO rules, once Trump's tariffs come into force in two weeks, the EU would have 90 days to enact the measures.

The EU insists that it is committed to open, global trade, and that Trump's tariffs are a protective measure to prop up U.S. industry that could undermine the international trading system.

European Commission Vice-President Jyrki Katainen said: "We all have to choose whether we want rules-based trade — which supports rules-based world order — or do we want rule of force, or the rule of the strongest, which we have now seen?"

Malmstroem said the real cause of the problem is an oversupply on global markets, and she rejected Trump's assertion that the tariffs are needed to protect U.S. national security, especially when most EU countries are members of NATO.

"We are friends. We are allies. We work together. We cannot possibly be a threat to national security in the U.S., so we are counting on being excluded," she said.

Europe's main steel federation said Trump's reasons for slapping tariffs on steel and aluminum are absurd and warned that the move could cost tens of thousands of jobs across the continent.

EUROFER chief Axel Eggert said "the national security justification the president has used - and the linking of these tariffs to NATO funding - is an absurdity."

The EU exported about 5.5 million tons of steel to the U.S. last year. European steel producers are concerned about a loss of market access, but also that steel from elsewhere will flood in.

"The loss of exports to the U.S., combined with an expected massive import surge in the EU could cost tens of thousands of jobs in the EU steel industry and related sectors," Eggert said.