Many U.S. drinkers of Beck's thought the brew was still a century-old German import. 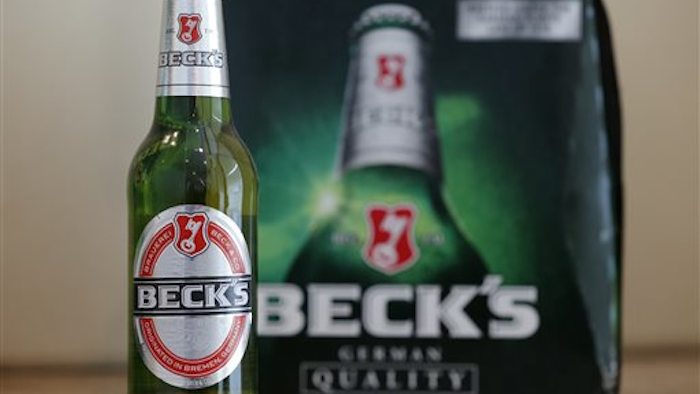 U.S. drinkers of Beck's beer who thought the American-made brew they were buying was still a fancy, century-old German import can get cash payments under a $20 million settlement approved Tuesday in a class-action lawsuit over deceptive packaging.

On tap: People with proof they bought Beck's at retail outlets could get up to $50 per household. Those without receipts can qualify for $12 maximum. Claims may be filed through Nov. 20 via a court-approved website.

The settlement, approved by U.S. Magistrate Judge John J. O'Sullivan, came in a lawsuit filed in 2013 by several Beck's drinkers who noticed there was almost no visible "made in the U.S.A." language on the beer's packaging even though it has been brewed in St. Louis, Missouri, since 2012.

Instead, in big letters, the Anheuser-Busch InBev brand emphasized its "German Quality," noted that it was made under the "German Purity Law of 1516" and originated in Bremen, Germany.

All may be true, said plaintiffs' attorney Tucker Ronzetti, but the point of the lawsuit is that a beer made in St. Louis shouldn't be passed off as the import it once was — with premium pricing to boot.

"They realized they had been deceived," Ronzetti said of the plaintiffs. "The packaging didn't really explain that it was a domestic beer."

There was some U.S.-made language on the packaging and bottles, but it was difficult to find. For example, a Beck's drinker had to turn a 12-pack upside down to find the country of origin on the box's bottom. Still, U.S. regulators approved the designs.

The original Beck's brewery, founded in 1873, remained in the same family until 2002, when it was purchased by the Belgian conglomerate now known as Anheuser-Busch InBev. Court documents show that Anheuser-Busch decided for cost reasons to shift brewing for Beck's U.S. market in 2012 to St. Louis, where the company makes Budweiser and other beers.

Yet the Beck's packaging still emphasized Germany, something Ronzetti's lawsuit claimed was misleading and false advertising. One Miami plaintiff, Francisco Rene Marty, said in court papers he bought a six-pack or 12-pack of Beck's every week partly because it was supposedly brewed in Germany using local ingredients that gave it a distinctive taste.

Marty said he "would not have purchased Beck's had he known (Anheuser-Busch's) representations were false."

Anheuser-Busch initially tried to get the lawsuit thrown out but finally agreed to the settlement earlier this year and changed its packaging to more prominently show that Beck's is made in the U.S. Under the settlement, the company does not admit any wrongdoing.

"We reached a compromise in the Beck's labeling case," said Jorn Socquet, Anheuser-Busch vice president for marketing. "We believe our labeling, packaging and marketing of Beck's has always been truthful, transparent and in compliance with all legal requirements."

An estimated 1.7 million U.S. households could qualify for settlement payments. According to court documents, in 2012 the company sold more than 2.6 million cases of Beck's in the U.S. at an average price of about $27 each.

Ronzetti, who negotiated a similar settlement last year involving Japan-originated Kirin beer also owned by Anheuser-Busch, and his legal team will receive a flat $3.5 million in fees and expenses — about 11 percent of the potential payout to consumers.

The settlement applies only to Beck's beer sold at retail outlets, not at bars or restaurants.